Firstly a warm welcome to my new followers, many thanks for taking the time to follow my blog.

Carrying on with the Tudor theme this tiny piece is a reproduction of a sewing box that would have been used by the ladies of that period for holding needles and threads for carrying out repairs to garments. 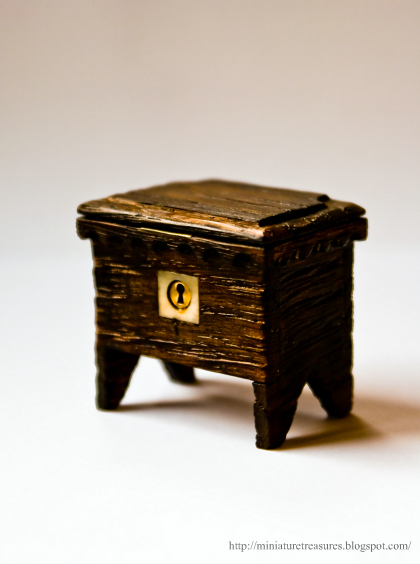 The box is constructed from genuine 16th Century English Oak , the square lock plate is genuine Ivory inlaid with brass and the inside is lined with 17th Century Vellum. Instead of filling the box with various sewing items i decided to put a small Bronze Tudor button which also dates from this period and is removable for viewing. 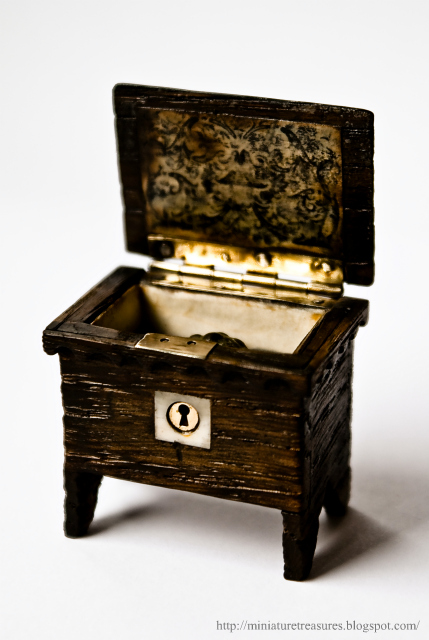 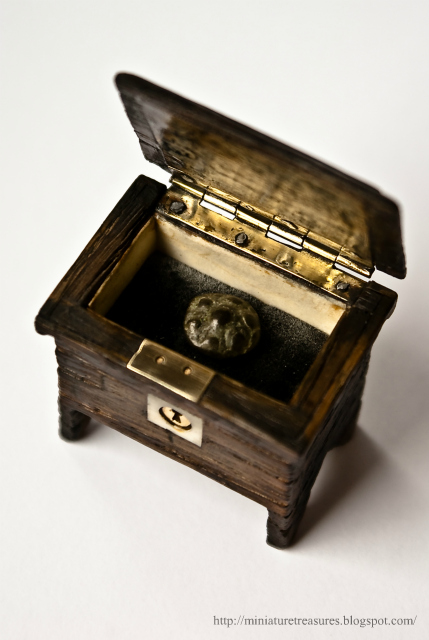 The dimensions of this piece are 35mm Width x 35mm Height x 30mm Depth, the box was then given a natural bee's wax finish.
Have a great and safe week everyone.   Tony.
Posted by Miniature Treasures at 13:48 4 comments:

Over the last few weeks I have received quite a few emails about if I have an online shop and the price of my work and if its for sale.
The short answer is yes everything I make is for sale, but at this moment in time I do not have an online shop.
Working out prices for the pieces is a difficult process, each piece is handmade and in some cases for example the collectors cabinet  may contain valuable items so the price of that piece will reflect this. In other pieces the materials used are very difficult to obtain and make each piece unique in a sense that its almost impossible to replicate .
If your interested in any of my pieces and wish to make me a serious offer then just drop me an email and i will be happy to answer any of your enquiries.
As you may know  I have a passion for collecting unusual items including miniatures if you have something which you think i may be interested in and your willing to do a straight swap then just ask I'm always open and willing to listen to suggestions!!!
My contact button is located in the right hand side colum of this blog.
Have a great week  Tony.
Posted by Miniature Treasures at 11:07 No comments:

As well as working on the Tudor house I've also been working on various other pieces over the last week or so. Since my hours have now been changed in my full time job completing projects at least for the time being is going to take a little longer than i expected.
Firstly id like to share with you a new piece that i completed today. Its a tiny box made from ancient English Oak that's based on a design from the 1500s, and would have graced the shelf of some large wunderkammer collection in 16th or 17th century Europe. 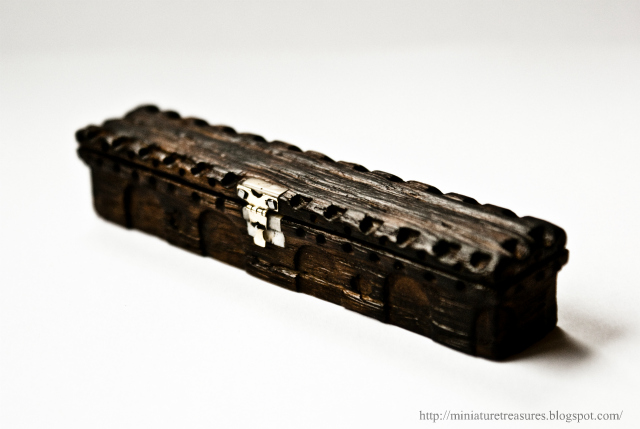 Open up the box ! 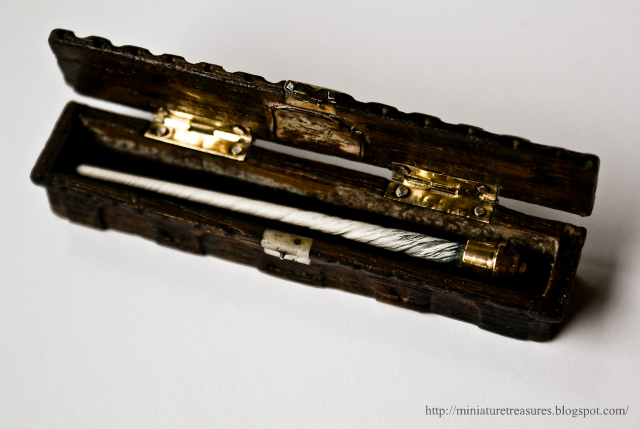 And inside lays a rare unicorns horn. Until the 19th century, belief in unicorns was widespread among historians, alchemists, writers, poets, naturalists, physicians, and theologians and many wunderkammer collections held so called pieces. 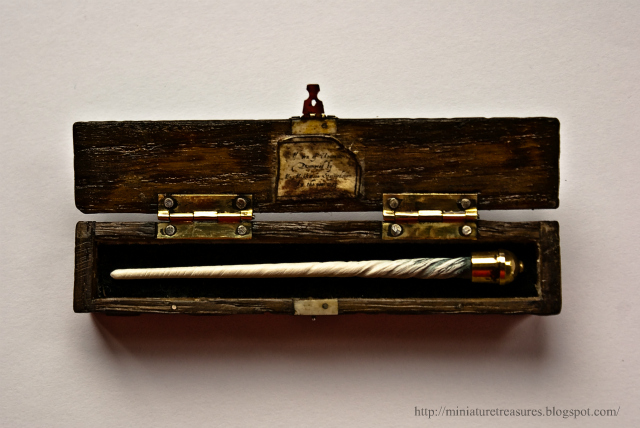 These sort after mementos were said to have the power to render poisoned water potable and to heal sickness. The box itself measures around 90mm in length with the horn measuring around 75mm.This piece would make a beautiful addition to any wunderkammer or natural history collection in 1/12th scale and comes complete with a letter of how the horn was found and how it came to be presented in this box.
On another note the Tudor house im working on at the moment is now coming into the final phase of its build. The rear section which is removable so the inside can be viewed is now complete with the exception of the inside being decorated. 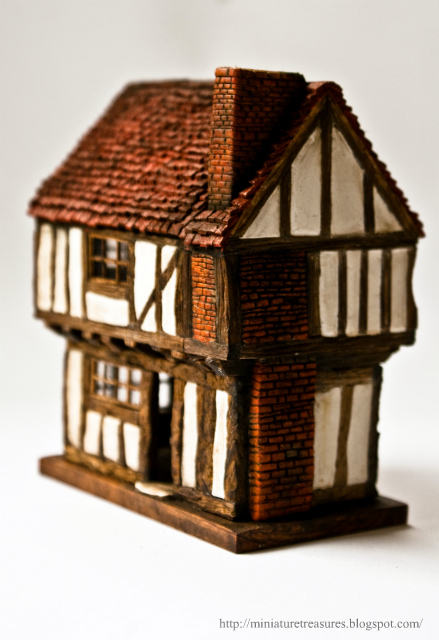 Showing the completed chimney and brickwork. 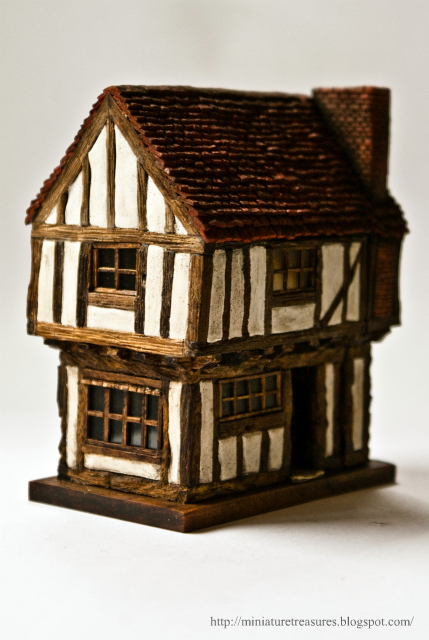 I think a couple of nice chimney pots will look great added to this and finish the roof off nicely.
Have a great weekend everyone.   Tony.
Posted by Miniature Treasures at 18:23 2 comments: 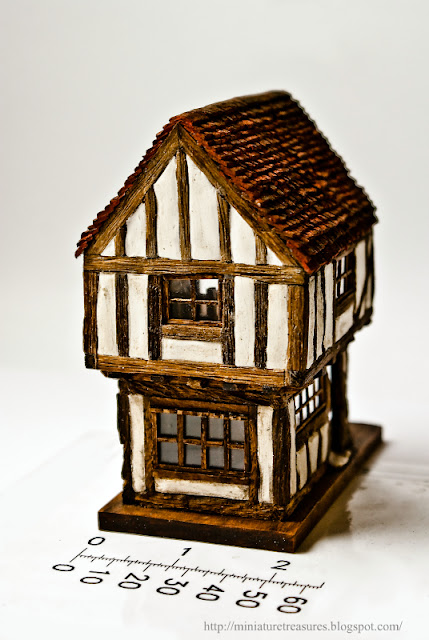 Hopefully sometime in the future i will get to try my hand at thatching again only this time on a larger scale which should be more easy. 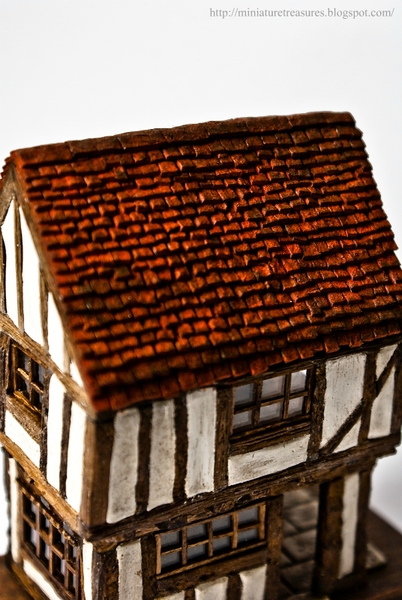 I'm quite happy how the look of these turned out, especially as its my first attempt all thats left to do is once the whole building is complete is to add a little more detail.
Ive also managed to build the light unit  which will sit underneath the base, this will consist of just one light but will be strategically placed so that it gives off a candle type light in the lower and upper floors, this will be operated by a hidden switch but wont be installed until the project is virtually complete.
Also a warm welcome to all my new followers and a big thank you for finding my work interesting enough to follow.
Have a great weekend everyone.  Tony﻿
﻿
Posted by Miniature Treasures at 16:49 4 comments:

First of all a warm welcome to all of my new followers ! It really is inspiring to see that so many people have decided to follow my blog, Many thanks to you all .

Ive managed to construct and fix in place the roof timbers over the last couple of days, it gets rather frustrating sometimes holding down a regular job when sometimes all you want to do is sit down and complete the next step of the build. 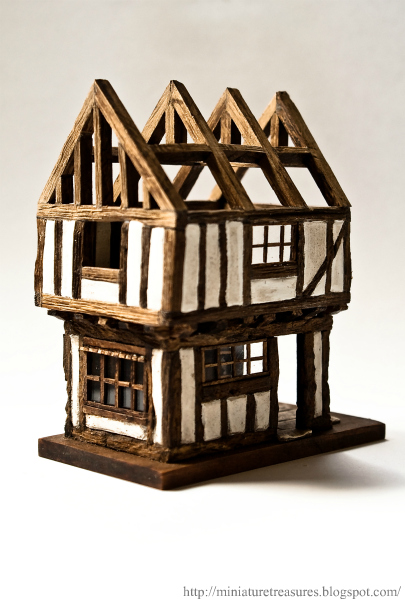 The next step is to decide if i should fix roof tiles or have a go at thatching, thatching is OK providing i can find a material that matches the scale and looks realistic, if this proves to difficult then tiles it shall be. 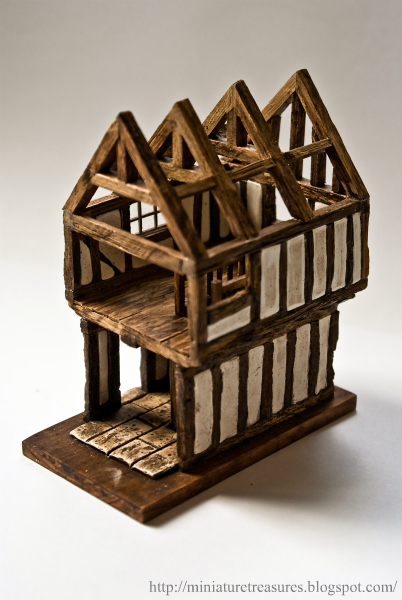 Also completed is the section of brickwork which surrounds the fireplace inside i will show more photos of this once the roof section is complete and the upper level chimney is in place. 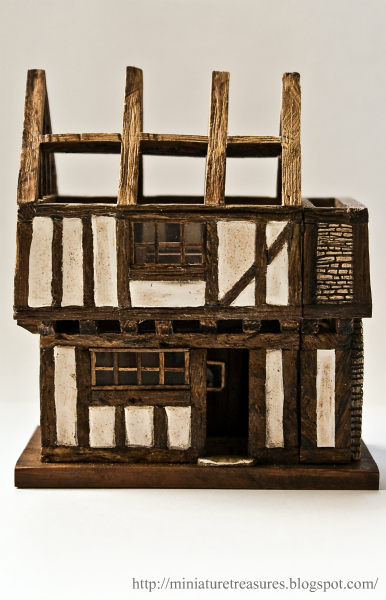 ﻿
One of the other things I'm undecided about is if i should colour the white panels with either a yellow or red Ochre wash as many timber framed buildings from this period would have had there white panels of wattle and daub coloured with this natural pigment. decisions,decisions!!
Have a great weekend everyone   Tony.
﻿
﻿
﻿
﻿
Posted by Miniature Treasures at 18:58 No comments: