This week has been exceptionally busy for me but i have managed to construct the footings and floor for my very first build. As mentioned in my previous post i have decided to construct the cobblers shop in 1/24th scale as opposed to 1/12th the main reason for this is at the moment i am limited to the amount of old oak timber i can lay my hands on and constructing it in 1/12th scale would use a considerable amount. 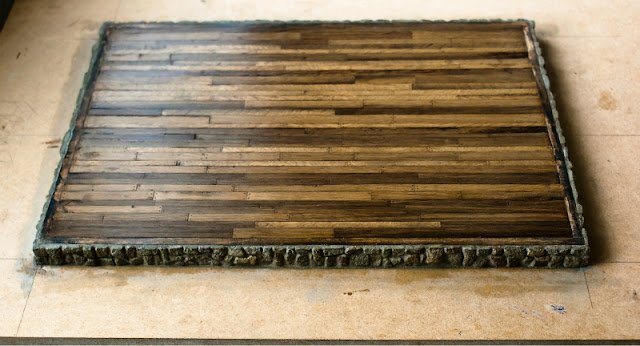 All the floor boards were cut individually and sit on a framework of oak joists which are then surrounded around the edge with Cotswold stone each floorboard is fixed into place with tiny dowels i used a total of 129 boards and over 500 dowels to fix them in place then just treated the floor with bee's wax. Its not perfect by no means but that's the way i like it, they look like battered and bruised boards which have been sitting there for the past couple of hundred years. I spent a day last week visiting a local property that was built in the 1600s looking at and measuring floorboards and measuring the stone work foundation that the house sits on. 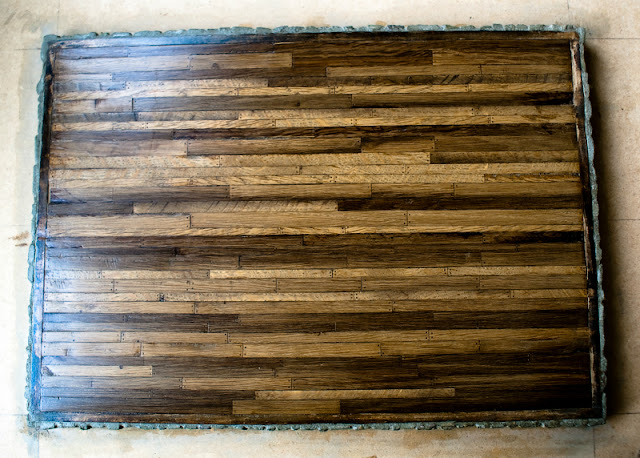 This wont be a quick build its mainly something for me to do when I'm not making furniture, in saying that though its something I've wanted to do for sometime now and thought it was about time i started it. I have no idea how its going to turn out although the basic plan of the ground floor is firmly stuck in my head and as the building grows other ideas and thoughts will probably creep in so I'm keeping open minded. I will also be making most of the furniture and other accessories for the shop so its kept in line with the period.
The building itself will be Tudor but the shop and all the contents will date from around 1850 as this is the time period that the cobblers shop my farther served his apprenticeship with was established.
I'm looking forward to this build and I'm sure that i shall come across many problems and dilemma's but half the fun is working around these and solving them.
A warm welcome to my new followers, many thanks for taking the time to read my journal and take an interest in what i make.
Have a great weekend everyone.
Posted by Miniature Treasures at 18:16 14 comments:

Email ThisBlogThis!Share to TwitterShare to FacebookShare to Pinterest
Labels: My Work, The Cobblers Shop, Tudor

This weekend has been rather quite on the miniature scene, firstly i got a call yesterday morning off my wife saying the car had broken down, OK no big deal! problem was the car was on a country lane that is barley big enough to fit two vehicles side by side and is regularly used by farm vehicles.To cut a long story short i ended up pushing the vehicle maybe a quarter of a mile until i reached somewhere i could look at it properly, eventually after around two hours i found the problem and by the time we got home i was lets say not in the mood to tackle anything else.
Today i decided to clean up my workshop which incidentally i don't do regularly and sort out my timber stock, I'm getting increasingly anxious to design and build a property but i cant make my mind up as to what scale i should build it in. The reason, well i really want to use the English Oak which i acquire from various sources and is usually quite old but if i build in 1/12th scale i imagine it will rapidly decrease and i don't want to stop making the other things i make just to complete a building, so.. i thought about building in 1/24th scale yes i would still use a considerable amount but no where near as much as if i did it in 1/12th. How popular is 1/24th scale? do any of my followers have this scale? if so then let me know your opinions, i would be most grateful.
I'm sure you have all experienced that feeling where your itching to start on a project, well that's how I'm feeling at the moment and i instinctively know that when i get a feeling like this its a good sign. 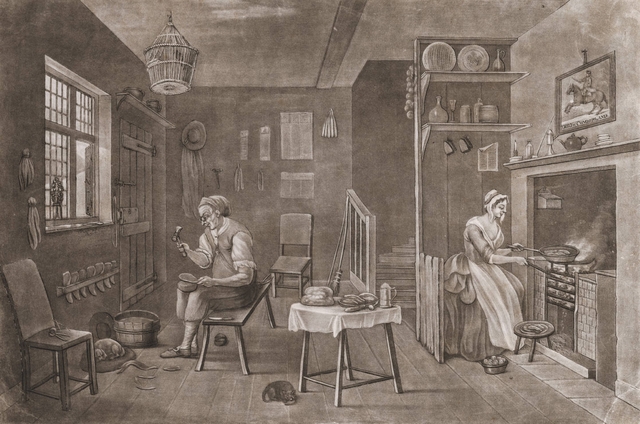 If i do decide to go ahead with a property build as my first project i would like to recreate a cobblers shop. My farther was a cobbler before entering service in WWII and specialised in making infants and ladies shoes so this seems fitting as a first build attempt.I don't want to stop creating other pieces of work though, i have one commission which is definite and maybe another in the pipeline in 1/6th scale, but i have also acquired a fresh stock of ivory so i have other works in the pipeline for this too.
I guess there's one thing you can say about creating miniatures and that is there's always a challenge around the corner and inspiration can be drawn from many forms including family history.
Have a great weekend everyone.          Tony
Posted by Miniature Treasures at 15:58 6 comments:

This is the final piece in a series of 3 commissions that i was asked to make, Its been enjoyable making these as each one varies in design from the next its also the first time i have incorporated secret draws and compartments into pieces I've made. 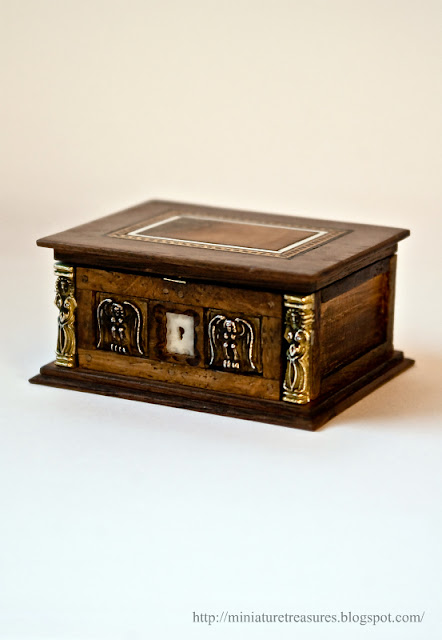 The lid was made using walnut and i incorporated a piece of olive wood from an old church collection box that was given to me, this has been surrounded by an ivory, boxwood and ebony inlay. 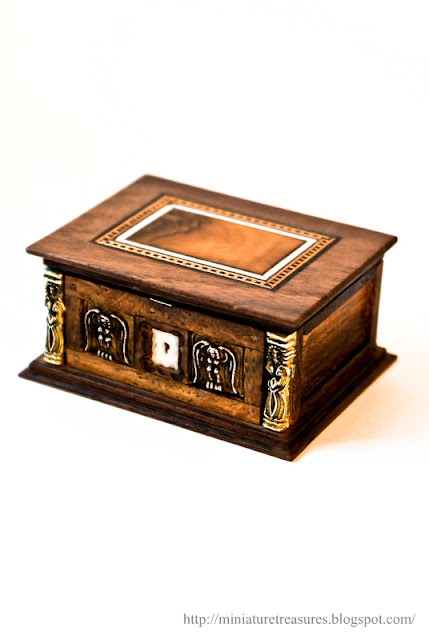 ﻿
My inspiration for this piece of work is taken from the renaissance period where a box like this would have most likely originated from Italy or France, one of my favourite periods in history. 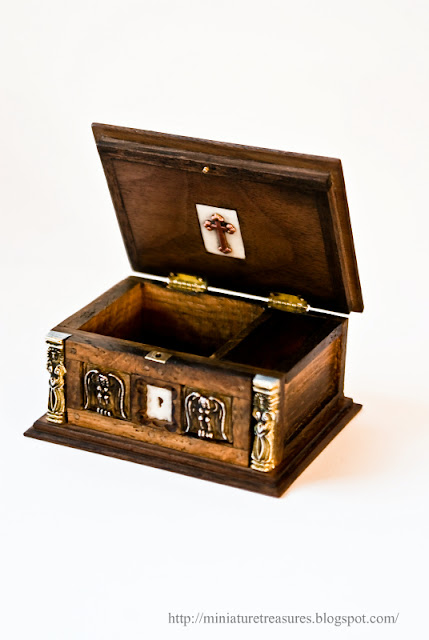 Upon opening the box the lid underside is decorated with a ivory inlay panel and has a solid copper crucifix which is also decorated in a design from the same period. To the right side is a small area that is covered in antique kid leather. 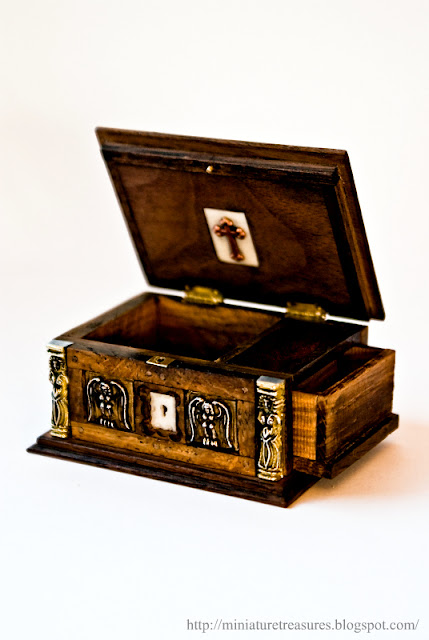 This shows where the secret compartment is located, again this is operated by pressing a small button from the inside which releases the compartment, an ideal size for holding letters perhaps or valuables. 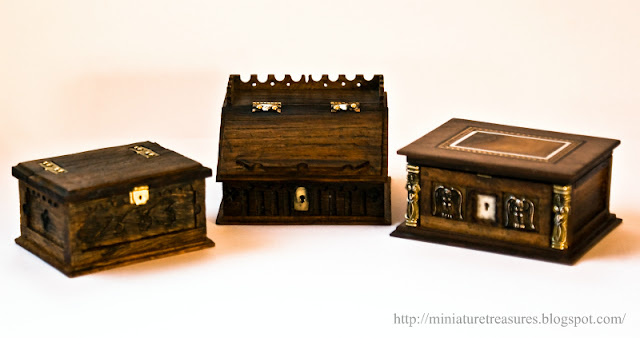 And finally all three pieces together possibly for the last time. I hope you have enjoyed the process of watching me create these pieces its been a pleasure to share them with you all and read your comments for which i am always grateful.
Have a great weekend everyone         Tony.
Posted by Miniature Treasures at 10:35 15 comments:

This is the last piece i have been commissioned to make, the design  differs to the other two boxes i have made as does the the timber i have used. 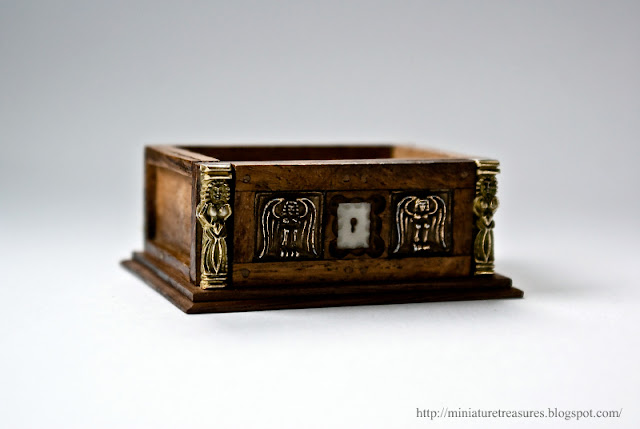 The timber i used for this piece of work is Oak which came from a house undergoing restoration  most of the roof timbers in this house originally came from a ship of some sort,the reason i know this is because of the carpenters marks that were shown to me by the tradesmen who were performing the restoration. The smell of this timber when i was cutting it was remarkable and unlike any timber I've cut before. 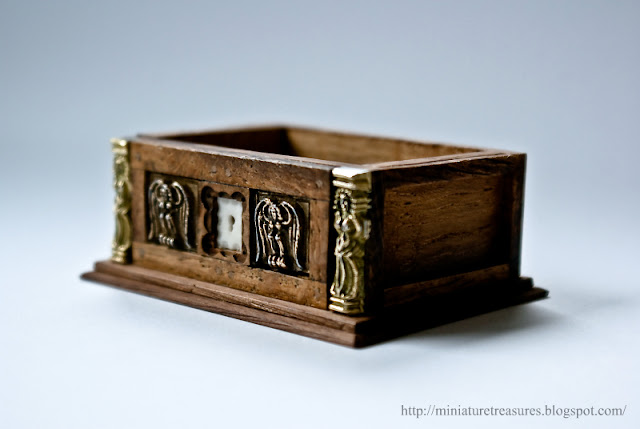 I also want to incorporate some antique olive wood into the lid of this piece which i obtained from an old church this seems fitting as the piece is meant for a bible.Hopefully i will post some more progress shots next week.
Id also like to take this opportunity to than Anne from Petit Bonheur for presenting me with this wonderful award i have to say i was a little surprised to say the least and am very touched that you consider my blog is worthy of it. Many Thanks!

Choosing 6 blogs to pass this award onto is no easy feat so id like to share it with everyone who
holds a passion and creative flair for making miniatures.

Have a great weekend everyone      Tony.
Posted by Miniature Treasures at 14:26 6 comments:

The second bible box that i have been working on is now complete. 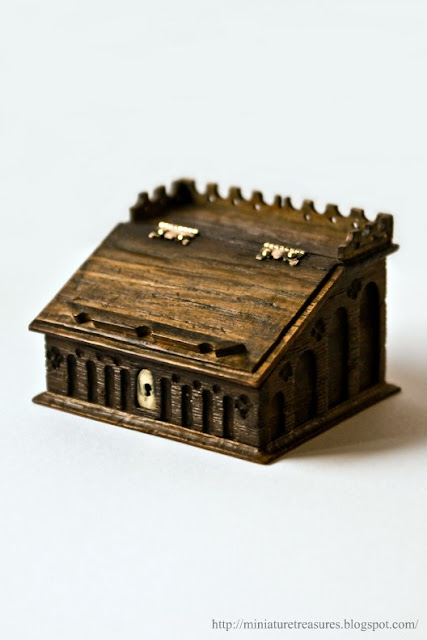 ﻿
The secret draw which i mentioned in my previous post is opened via a tiny push button on the back of the box, once pressed this releases the draw inside. The button is visible in the lower left hand bottom corner. 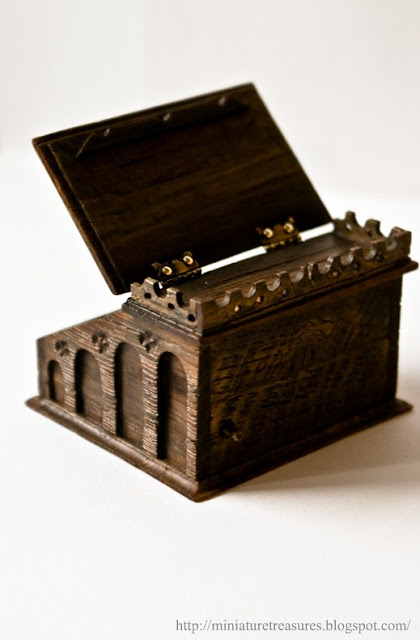 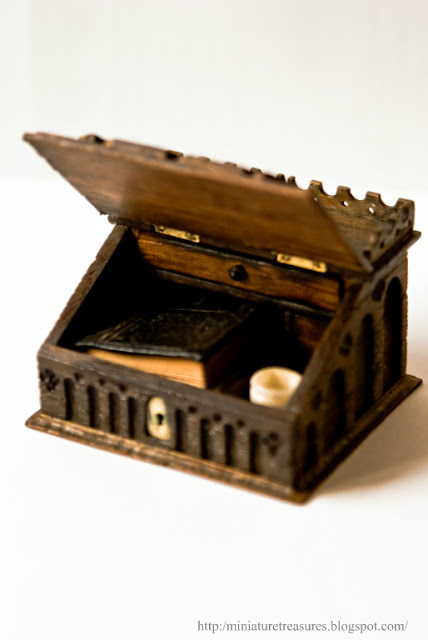 The box contains a antique miniature bible bound in black leather that dates to around 1890 - 1900, also a hand carved ivory crucifix and an ivory drinking vessel. 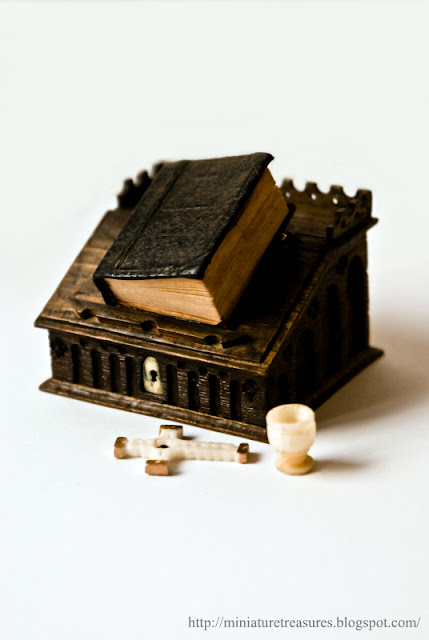 Ive enjoyed creating both of these pieces of work,based on the same concept but varying differently in design and decoration, which in some cases poses a challenge for the 3rd one i have to construct as this will need to be completely different from these two designs. 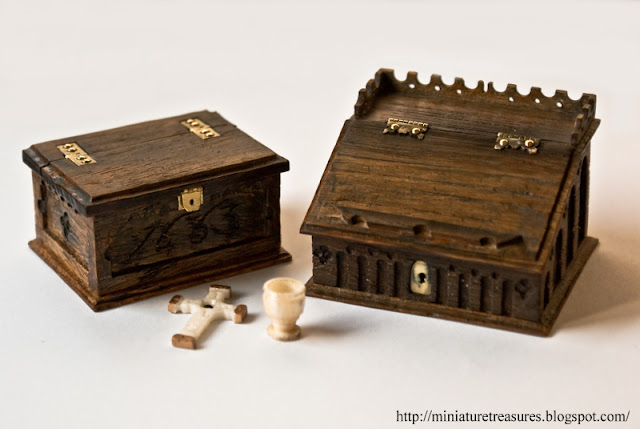 I have a couple of ideas for the third box but nothing solid so I'm just going to see how things progress.
A warm welcome to my new followers,many thanks for taking and interest in the pieces i create and following my journal.
Have a wonderful weekend everyone.            Tony.
Posted by Miniature Treasures at 19:11 11 comments: