Another piece of work which i have had on the go for sometime and only just recently managed to complete. This chest is made from a variety of woods, the main front frame work and panel is Olive wood while the two inlaid dragons are of boxwood, finally the two side panels and top are made from English oak which dates to around 1600. 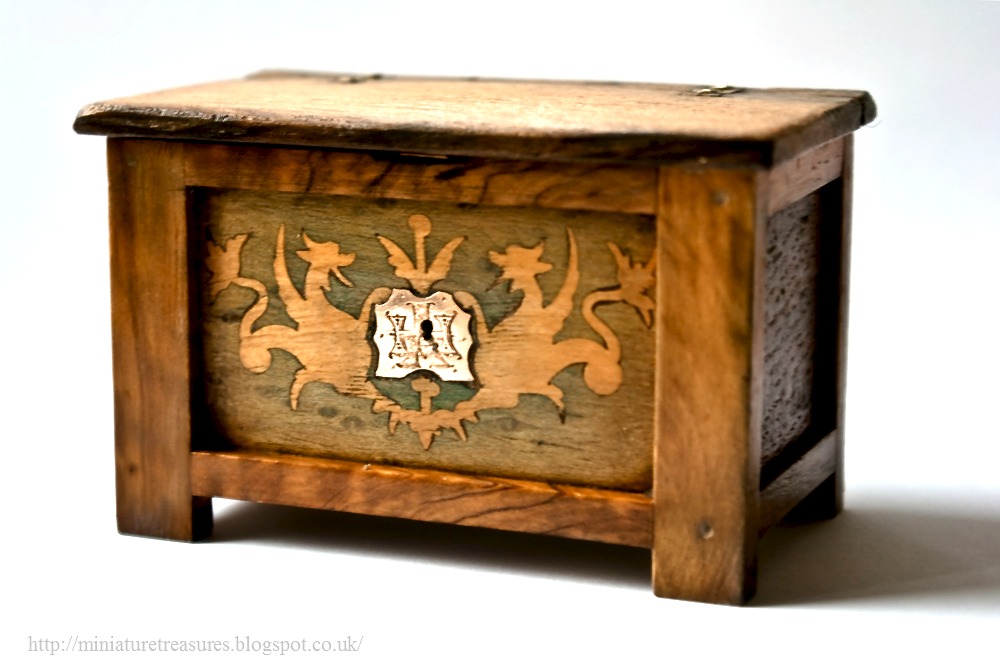 The centre lock plate is reclaimed brass which came from a victorian ladies watch which had a monogram engraved into the back. 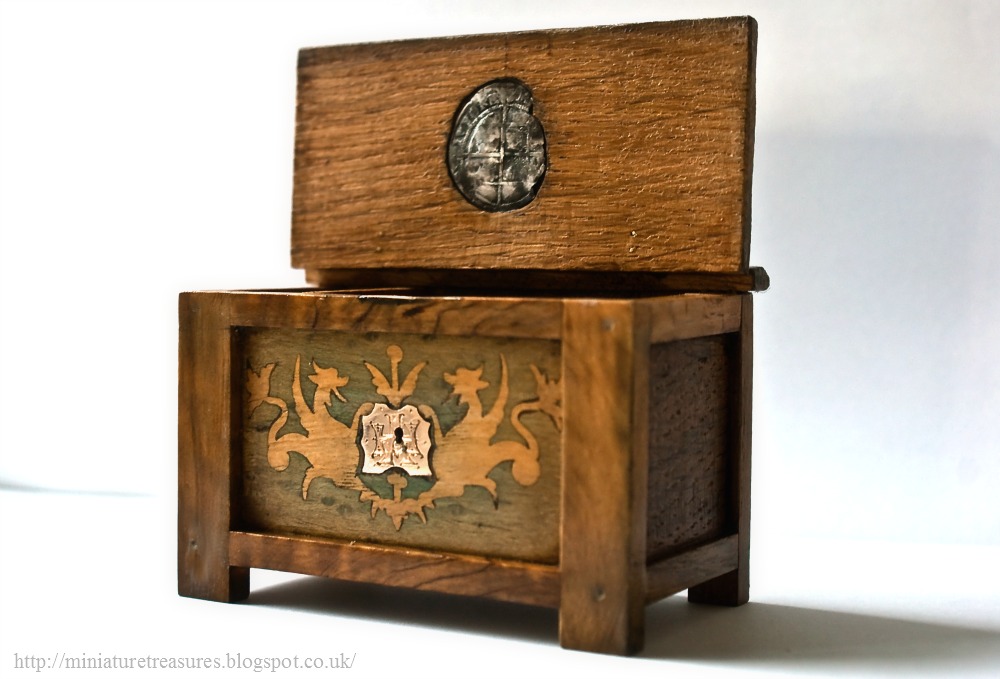 Once the lid is lifted inside sits a Queen Elizabeth 1st silver sixpence which i have mounted permanently this dates to between 1558 and 1603 roughly the same age as the oak timber i have used. I have found several of these coins over the years but have yet to discover one in great condition most i have found on farmland which is why there condition is possibly not brilliant due to the fact that ploughing has obviously taken its toll.The obverse side of this coin was particularly worn which is why i decided to mount it the way i have. 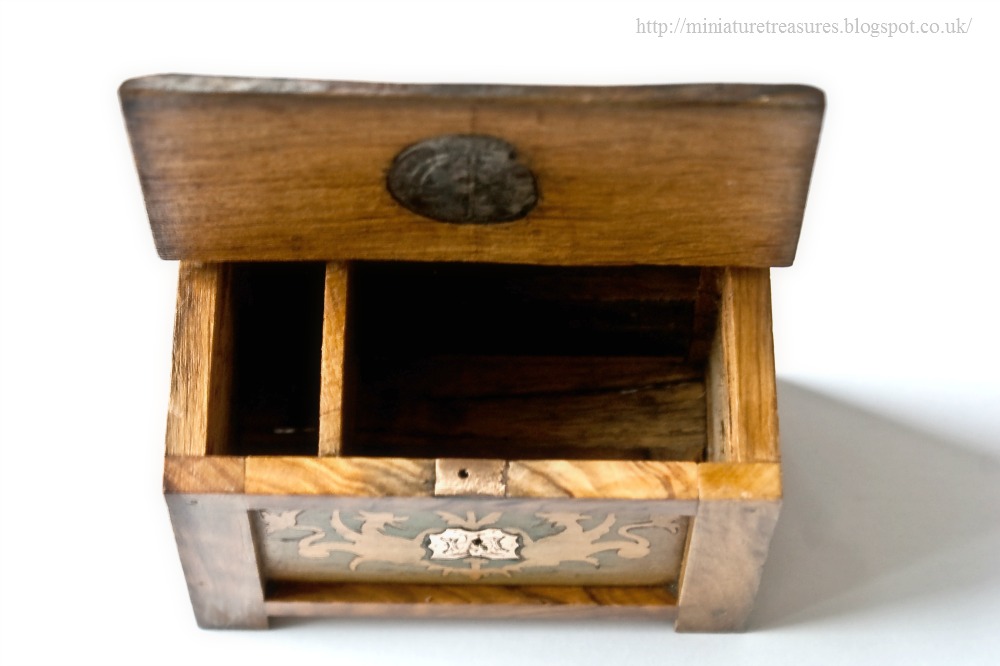 The inside is divided into two separate compartments which is common for chest or coffers of this period. 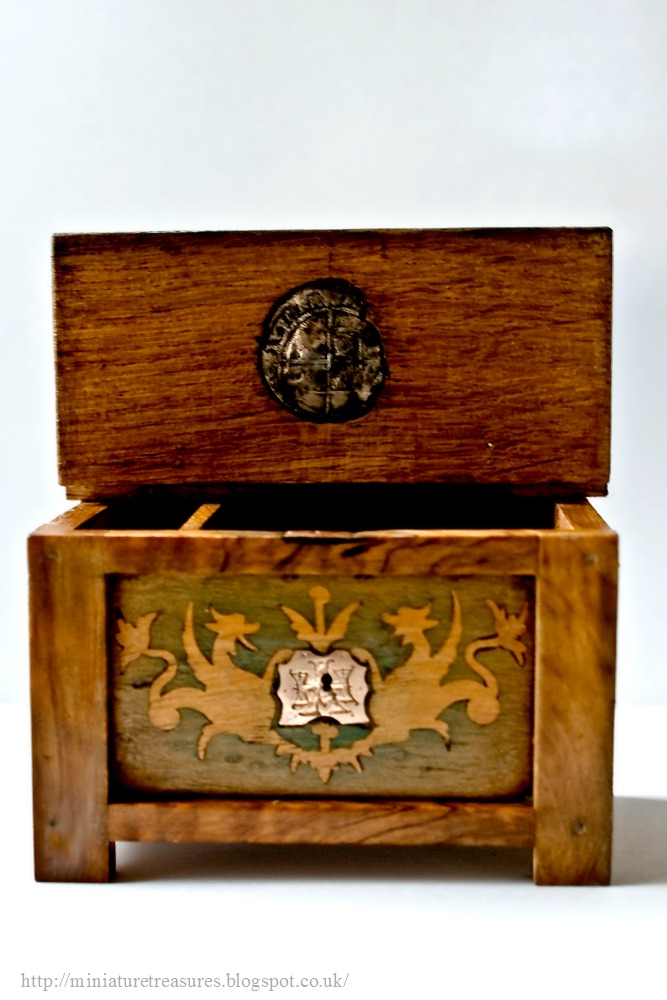 The dimensions of this piece are 3½'' Wide 2¼'' Height and 2'' Depth.
While writing this blog post i received a telephone call from the environment agency advising that my home is at severe risk from flooding, I'm not making any hasty decisions as i have been in this situation before and i was lucky enough to escape any major damage, if and when the water does rise then between myself and the help of my son i am positive i will have enough time to move what things are valuable to a safe place, fingers crossed all will be good!
My latest piece of work will also be available on my For Sale page.
Have a great and safe week everyone.   Tony.
﻿
﻿
﻿
Posted by Miniature Treasures at 17:24 12 comments:

Sugar and Spice and all things nice!

This piece of work has probably been my most difficult to date, not because of how its made but because most nights when i was working on this i had my five year old grandson sat right next to me! He is a very inquisitive young lad always asking why i do things the way i do and what this piece is for and what that piece is for and so on, i think I've learnt a whole new set of concentration and patience skills, Lol.

This particular piece of work has been on the go for a while now I've picked it up and put it down many times over the past few months but its nice to see it completed. 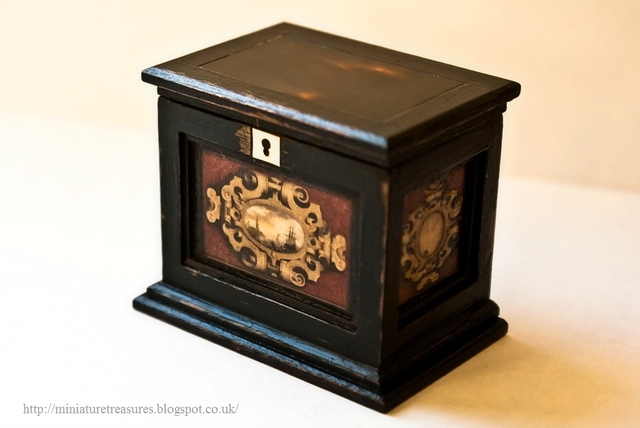 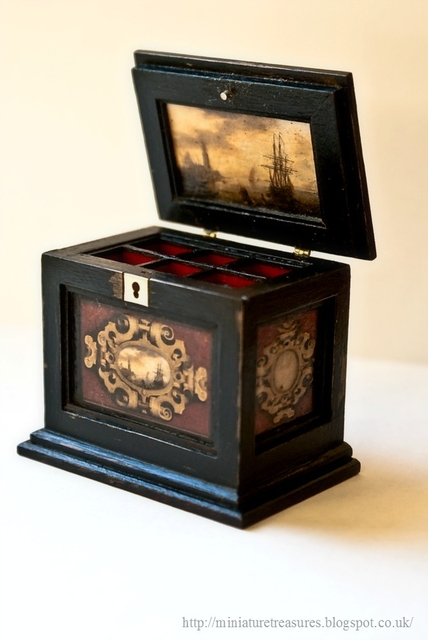 The inside contains 6 compartments that would have been used for transporting these rare and precious commodities by wealthy families, decorative panels on the outside and a seascape on the underside of the lid give a clue as to the use of the piece. The top centre section of the lid is genuine tortoise shell.
To the back is a secret draw which contains a coin, This coin is dated to 1737 and was discovered mud larking on the river Thames in London the coin has been cleaned but only very lightly and still retains a beautiful patina. 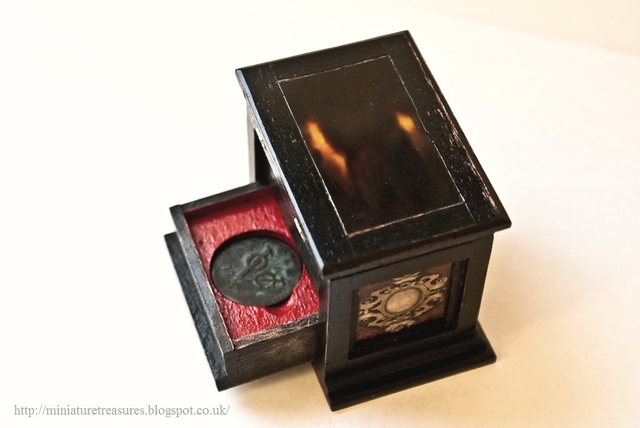 You may also be able to make out the markings on the coin which also denote the coin is a Dutch east Indies VOC 1 Duit which would have been around when the spice trade was booming and which i thought matched the piece perfectly. 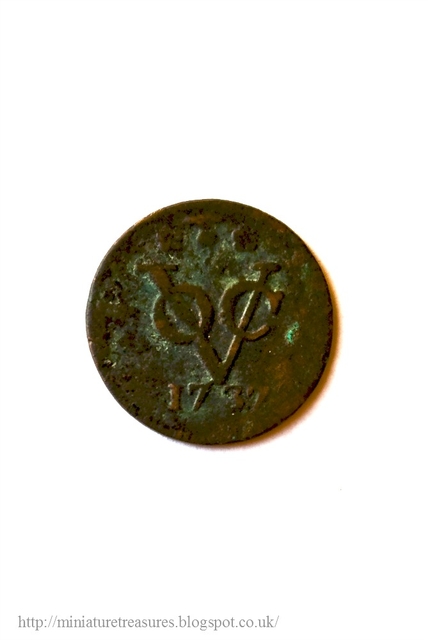 As you can see the coin is in pretty good condition for its age and is a beautiful piece of tiny history to go with this piece. 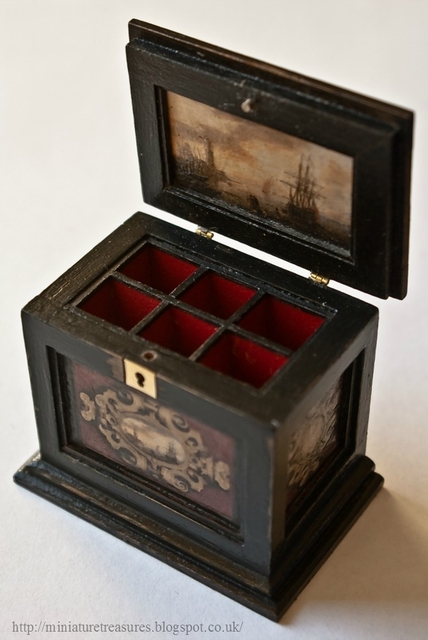 ﻿
﻿
﻿
The timber used for the construction is mahogany which has then had a worn lacquered effect applied to give a authentic used look. Dimensions of the piece are 2.5'' wide  by
2'' height and 1.75'' in depth.
Many thanks again to everyone who left me comments on previous posts,and for the new followers who have decided to follow my work.
Have a great week   Tony.﻿
Posted by Miniature Treasures at 14:49 30 comments:

Email ThisBlogThis!Share to TwitterShare to FacebookShare to Pinterest
I would like to start this post by thanking everyone who left comments on my previous post and for the personal messages i received i really appreciate each and every one.
I'm glad to report that my daughter is now back home but we will continue to give our support and help to her as she is not fully recovered and finds doing the most simple tasks quite difficult. 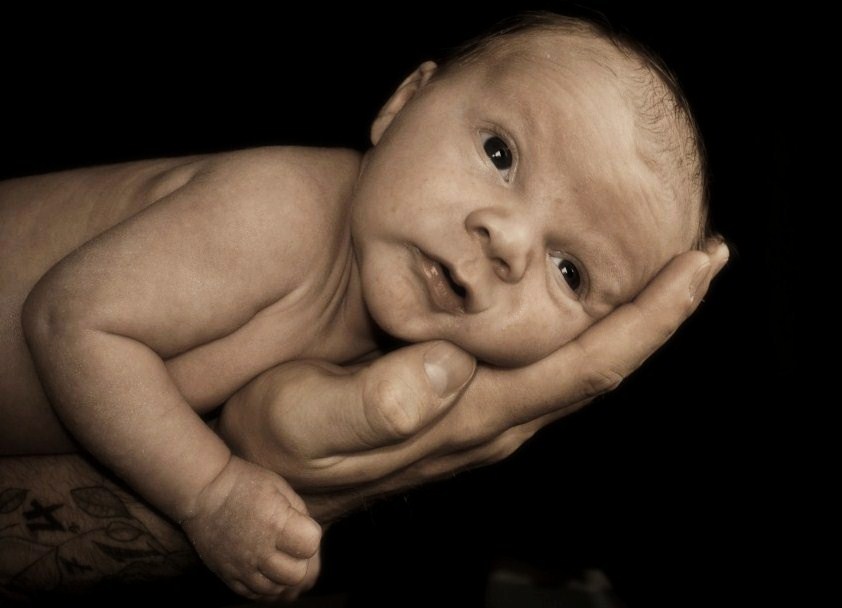 This is the latest shot of my grandson resting his tiny head in my hand, hes doing really well and putting weight on perfectly.
I have also been working ( when time permits ) on a new piece of work which hopefully i will post some shots of later as i still need to add a couple of finishing touches to it, my older grandson has taken particular interest in this piece of work because he has accompanied me though more or less the whole construction of it so hopefully as i said i will post some images a little later once its complete.
Thank you all again for your supportive comments.  Tony.﻿
Posted by Miniature Treasures at 09:28 14 comments:

Hi everyone, I have decided to take a short break from making miniatures for a while as my daughter has been re admitted to hospital because she has developed a serious infection and between her husband myself and my wife we are doing the best we can at looking after our grandchildren while all holding down full time jobs too, I would like to thank each and every one of you for the wonderful and kind comments from my previous post, i still find it amazing when i hold my new grandson just how really small and fragile he actually is.
Thanks again for all of your wonderful comments, and a very warm welcome to my new followers.
Have a wonderful weekend.  Tony.
Posted by Miniature Treasures at 17:06 22 comments: