The room box is coming to a point now where i will shortly concentrate on compleating the ceiling.As you can see from the photos there has been plenty more interesting items added i will go into a little more detail on these pieces in a future post. 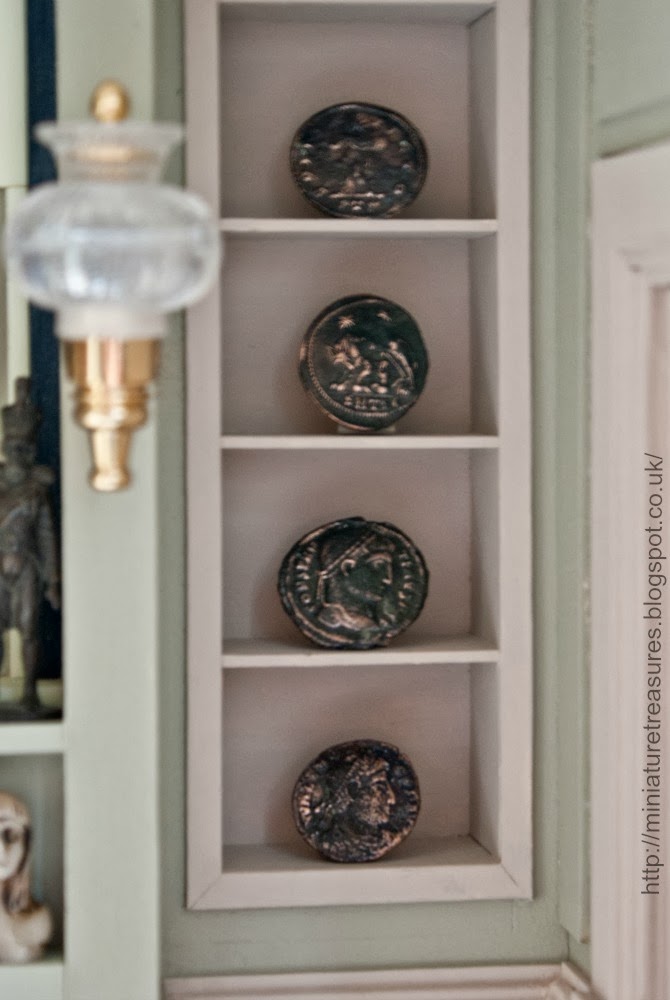 The five bronze roman coins above all depict different ruling emperors, on the other side of the room are four roman silver coins and one silver byzantine coin. 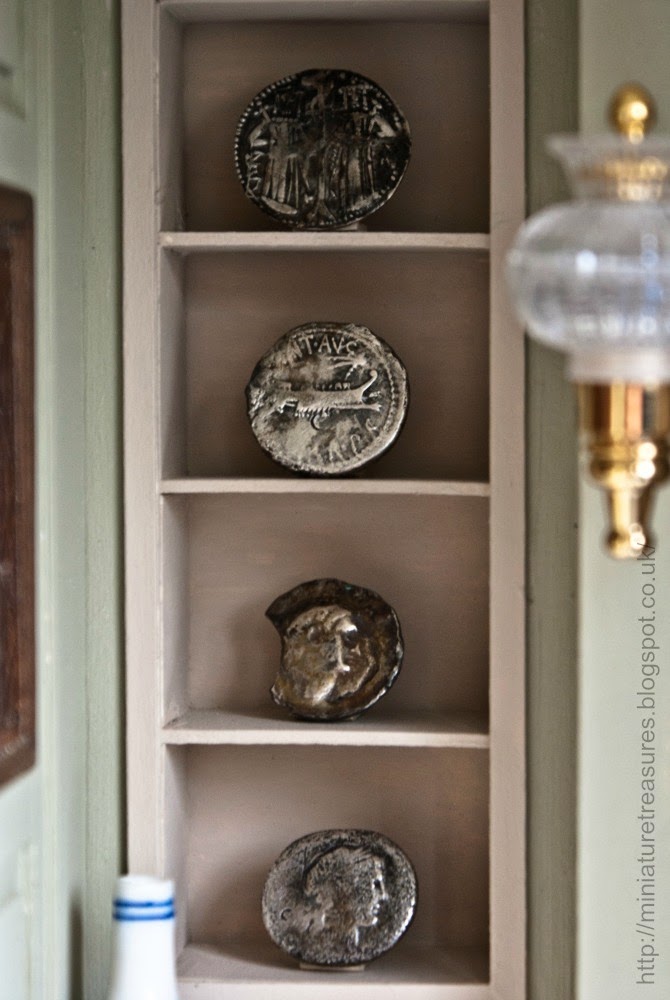 ﻿Most roman coins are rather small so they make excellent viewing pieces for a room like this and also blend with the books i mentioned in a previous post. 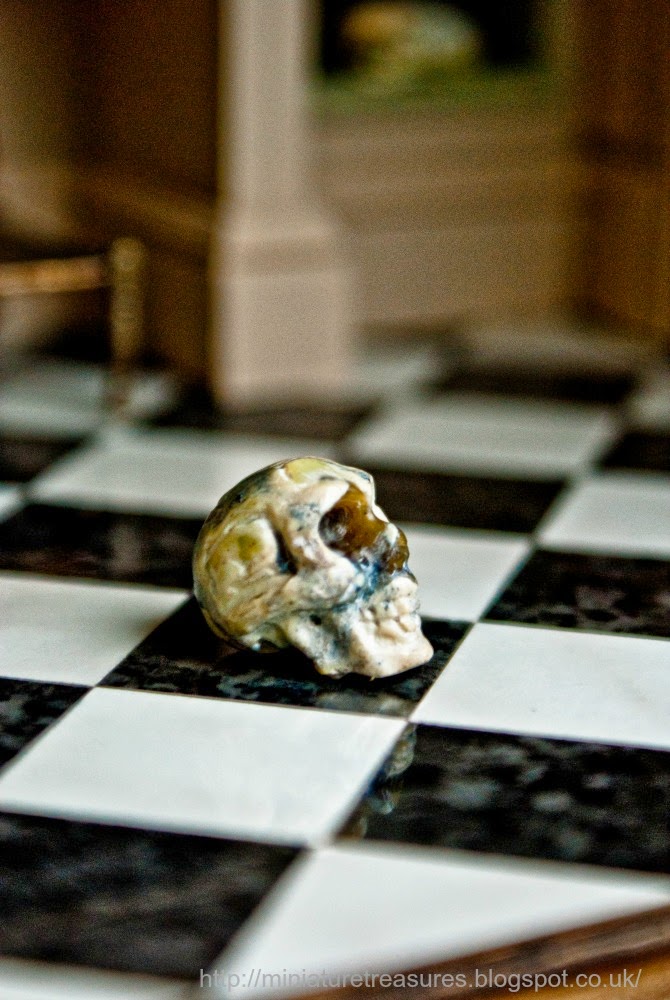 ﻿
The tiny skull is hand carved from opal and displays some very interesting colour variations from yellow to blues quite difficult to pick up by photograph, I'm not quite sure where to place him yet so for now he is just sitting in the corner of the room on the floor. 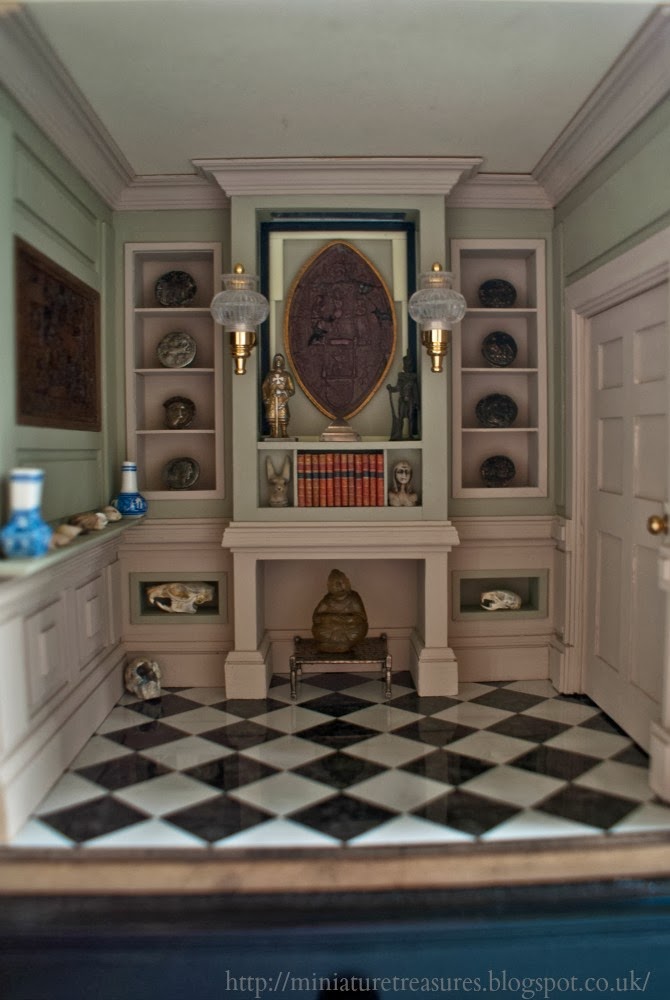 Theres also an abundance of other objects including two Japanese miniature vases, sea shells and figures i will do a complete rundown of all these items once the room is finished as there still maybe a few more to add. These collection rooms could be packed from floor to ceiling with different objects but i think I'm just about at the limit i want to be.
Have a great week everyone.   Tony
﻿
﻿
﻿
Posted by Miniature Treasures at 16:51 16 comments:

One thing that I wanted to add to this room were books but wall space is at a premium for other items so i had to think how i could still incorporate at least a few volumes and keep them tied in with the theme of this room. 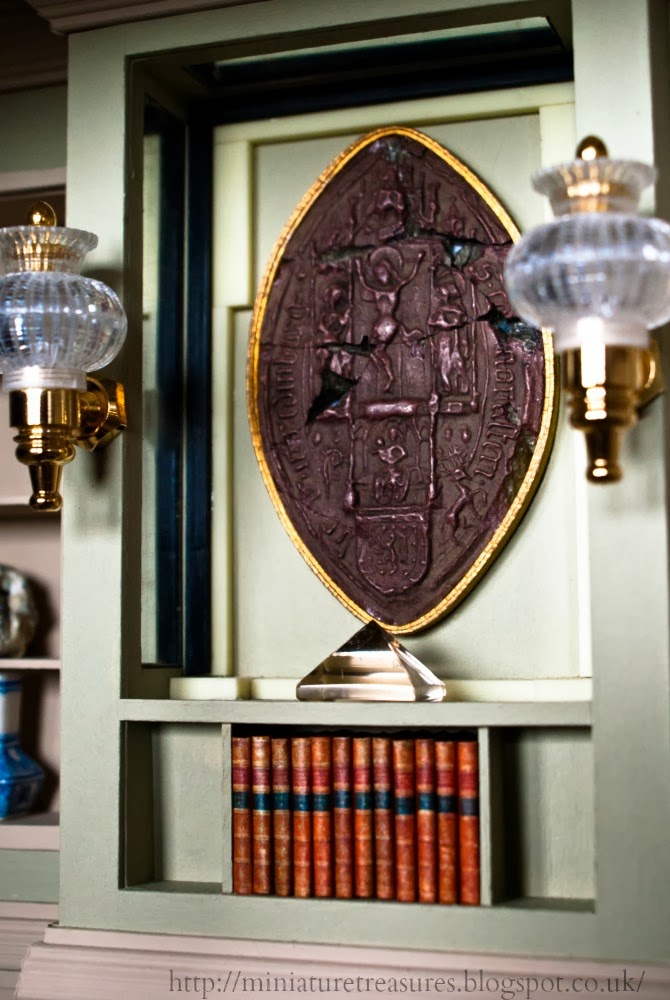 The books 12 volumes in total were first published in 1813 by Edward Gibbons and depict the rise and fall of the Roman Empire so these will fit in very nicely with items that yet have to be added.
Above the books sits a hand carved quartz pyramid built by civilisations for thousands of years and at one point the largest structures on earth what makes this one a Little more special is that its carved from welsh quartz.
I'm still adding and moving items around in this room so i guess some may not be in the places that i originally showed you to start with. Also in this photo you can just about make out the mirrors mounted in the top and sides of the wall opposite the mounted seal.
The seal had an inscription written on vellum which was attached to the back, I took the decision to remove the piece of vellum from the back of the seal for two reasons. The first was that i could not mount the seal into the wall so it was removable after various attempts i decided that it was to precarious and the chance of it falling onto the hard floor would only damage it even further.The other reason which i guess not everyone will agree on is that i wish for the seal to permanently stay with this piece of work this is why i took the decision to mount it permanently so its not removable. 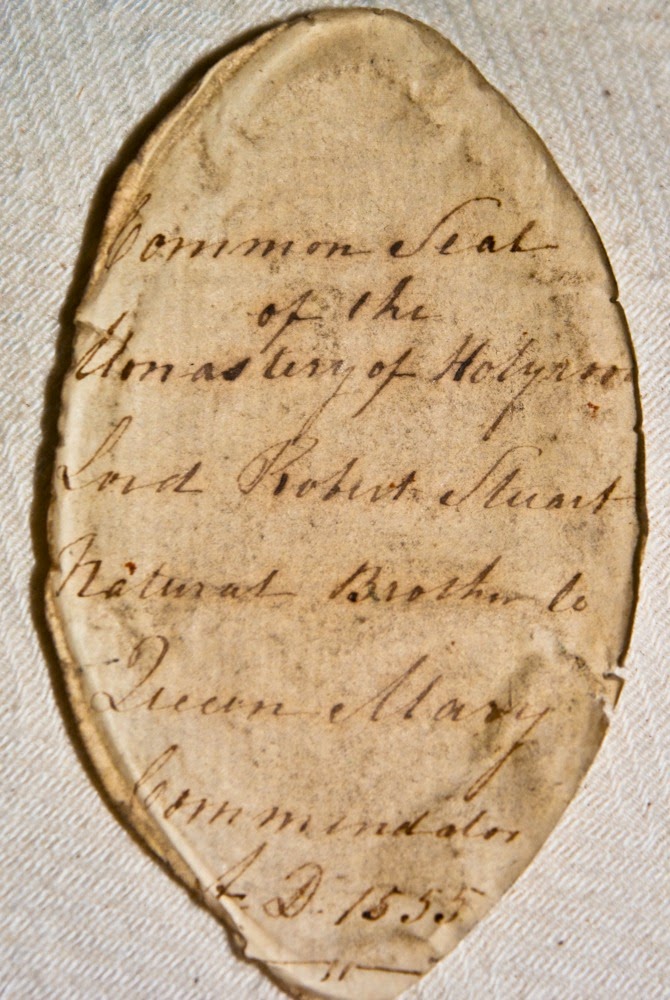 ﻿
﻿
The inscription on the vellum will still accompany the seal to its new home and will be placed in a secret compartment which has already been constructed into the cabinet.
Finally i hope you all enjoyed your New Year celebrations and your heads are not feeling too sore this morning!! Best wishes to all of you for a Happy and hopefully creative 2014.   Tony.
Posted by Miniature Treasures at 10:40 15 comments: