Well as promised here's some photos of the interior of the room box at night with the lights switched on.

I do apologise for the size and amount of photos in this post, i have to say when i first switched on the lights i was quite set back how different it made the inside look i often sit down at night in the lounge with just a table lamp on so i also decided to place it in the room and see how it look to be honest i couldn't take my eyes off it neither could my wife, in fact everyone who has visited has been pleasantly addicted to sitting next to it! so i hope you all like the images I've chosen for your viewing.
The next set of images show the secret compartment which slides up from the very top.

This then reveals a draw which contains quite a rare treasure, some of my Spanish friends may recognise this coin or a more familiar name piece of eight. The original "treasure coins." Struck and trimmed by hand in the 1500s through 1700s at Spanish mints in Mexico, Peru, and Colombia (among others), silver and gold cobs are handsomely crude, nearly all with a cross as the central feature on one side and either a coat-of-arms (shield) or a tic-tac-toe-like "pillars and waves" on the other side. Silver cobs are known as "reales" and gold cobs are known as "escudos," with two 8 reales (about 27 grams each) equalling one escudo. Some cobs were struck with a date, and most show a mint mark and an initial or monogram for the assayer, the mint official who was responsible for weight and fineness. Size and shape were immaterial, which means that most cobs are far from round or uniform in thickness. Cobs were generally accepted as good currency all around the world, and were the exact coins pirates referred to as "pieces of eight" (8 reales) and "doubloons" (any gold cobs but originally 2 escudos).
This particular coin was minted at Potosi. The silver was taken by llama and mule train to the Pacific coast, shipped north to Panama City, carried by mule train across the isthmus of Panama to Nombre de Dios or Portobelo whence it was taken to Spain on the Spanish treasure fleets many of which were wrecked or pilaged by pirates.
This particular coin shows evidence of chop marks where the coin would have had pieces literally chopped off to use as a less currency i will disclose the location of where i found this to the new owner.
I have to apologise again for my last post as the riddle on the back was unreadable i guess that was just me rushing lol anyhow here's a fully readable version for all.
Ancient code of order stand
Beneath the souls of superior grand
Secrets hold that bound there world
To guard the chance of second hurl
Dormant want to those that deem
And reap the chance to end there beam
Silent men women and child
Forever lost in centuries wild
Ye follow the eclipes for riches and fame
And if ye would prosper, do ye the same.

All im going to say is the riddle takes into account some of the items within the room box and its not as simple as it many appear to be!! Now i'll let you all ponder .
Have a great week everyone.  Tony.
﻿
﻿
Posted by Miniature Treasures at 18:49 13 comments:

Well its been a fair while coming but its finally completed!  Probably the longest and most complex piece i have constructed not just in terms of actually building it but the thought I've actually placed into it too. The following photos show the back of the piece. 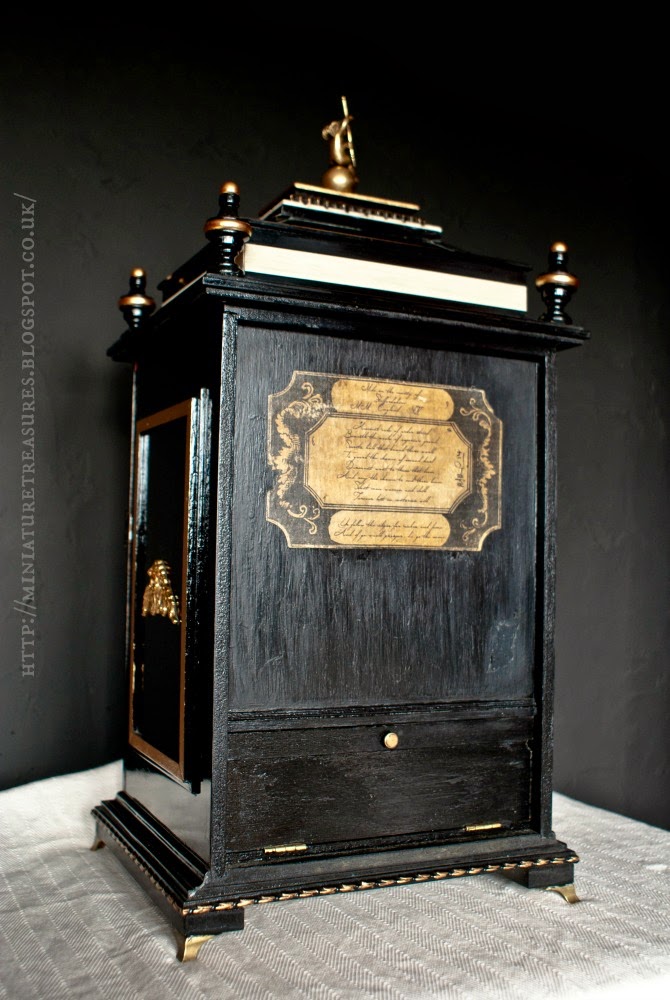 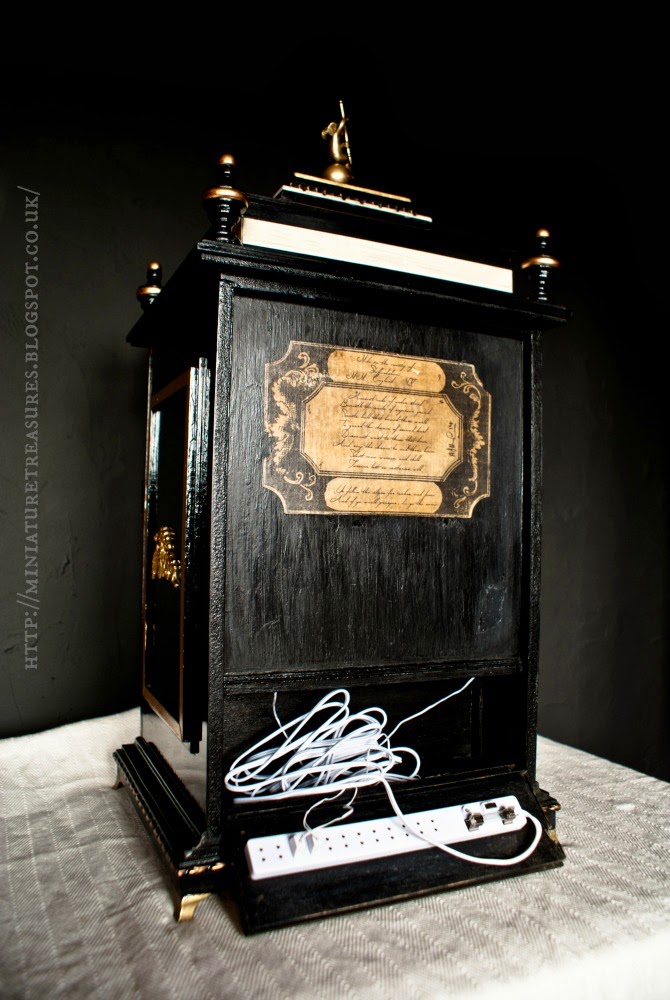 I've decided to leave the cable quite long this can then be made smaller by the new owner if he/she requires. Hopefully this week i will snap some images of the interior with the lights on. 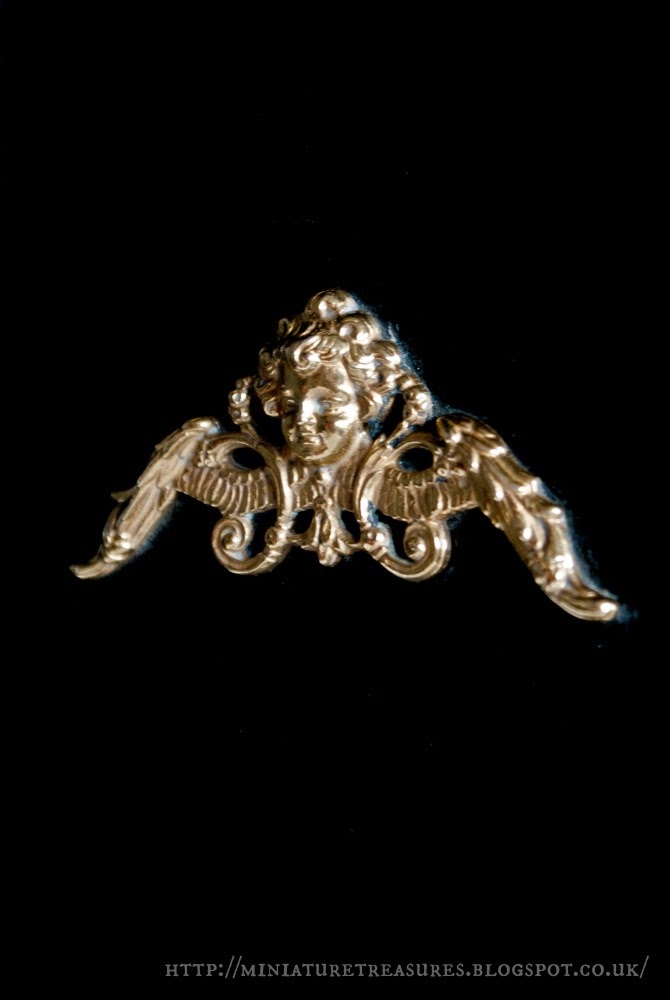 These solid brass cherub heads adorn both sides of the exterior. 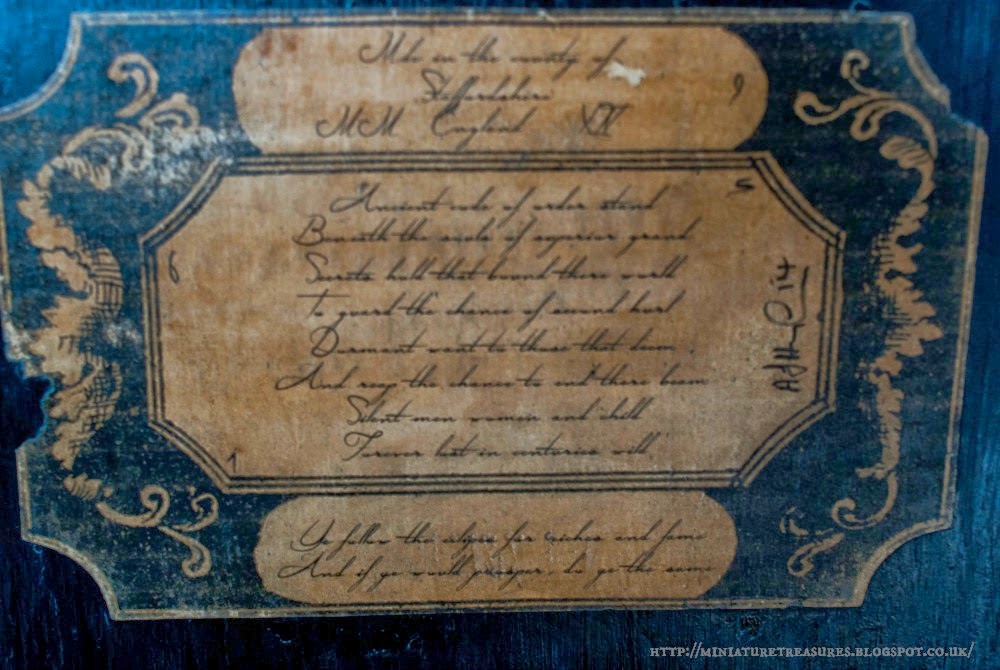 Fancy a Riddle!!  well as i said this piece is like no other I've made, the riddle on the back has taken a considerable amount of time to put into place and actually does lead to something!! However i can't divulge any more than that. If who ever owns this piece works it out great if not then i guess it will stay a mystery for a very long  time.
As i said earlier i hope to snap some shots of the interior lights on as well as a snap of the secret compartment and post these up time permitting sometime in the week.
This piece will also be placed on my for sale page.
Id like to thank everyone for their kind comments and emails on this piece of work they really do mean a lot to me and spurn me on to keep creating more and more.
Have a wonderful week everyone.   Tony.﻿
﻿
﻿
﻿
Posted by Miniature Treasures at 11:41 11 comments:

Hi everyone, Its been a few weeks now since my last post I've been struggling with regular migraines plus everyday chores but I've managed to make a little more progress and thought id share what I've managed to do. The main door of the box proved a little more tricky than i anticipated this was due to the fact that using real glass made the door heavy as the frame is rather delicate in the end i had no option but to use thin plexiglass also as a precaution i fitted three hinges instead of two. 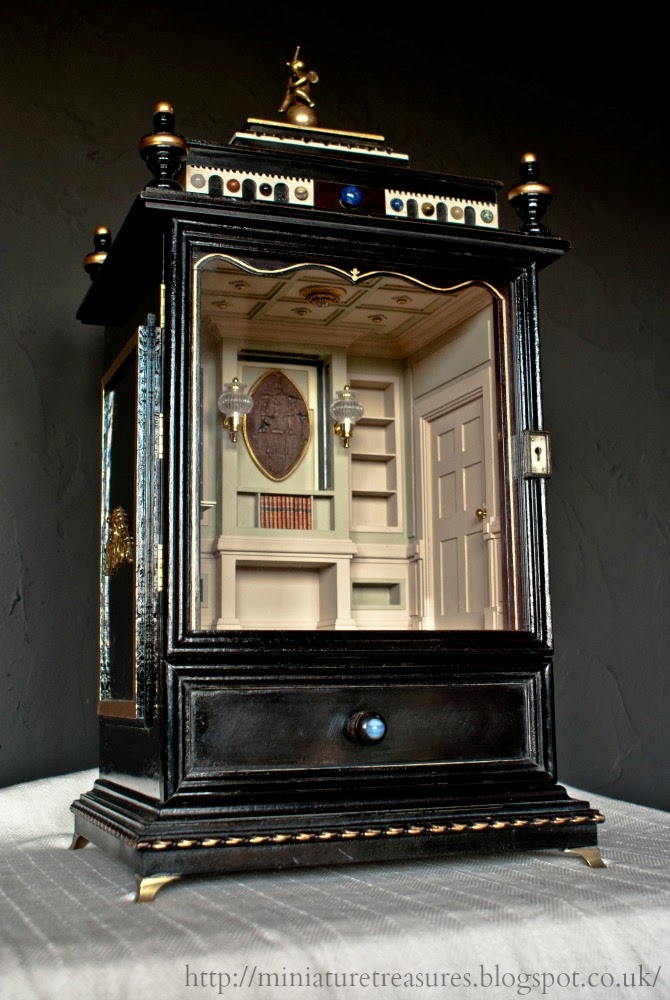 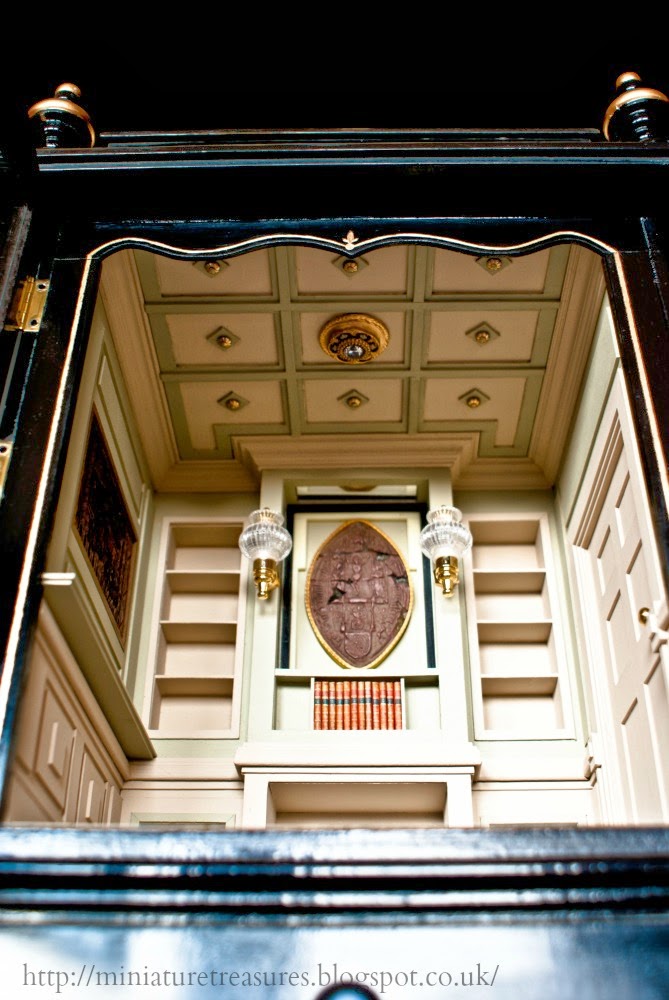 ﻿
I have also installed a matching frame surround to complete the room which has been decorated with a hand painted decorative gold border, this as you can see is also visible when the door is shut.
The second image also gives a better view of the ceiling. 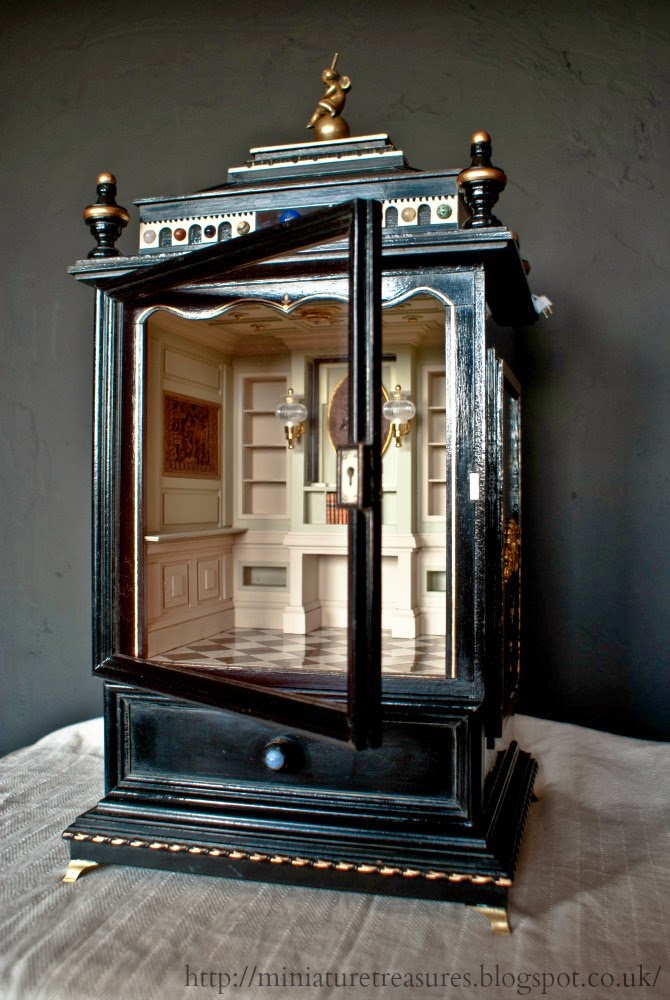 ﻿
The final image shows the door partially open. All that's left for me to do now is complete the secret compartment along with its contents and the rear compartment which holds the electrics plus a few minor things.

Its been a challenge completing this piece of work as i have been limited to the amount of time i could put in but it feels worth it now the end is in sight and i can start to make plans for constructing some new pieces once complete i will do a full rundown of all the contents with images to.
Have a great week everyone. Tony.

Posted by Miniature Treasures at 14:52 36 comments: