This post isnt really miniature related but i thought some of you may like the photos i took and thought id share a few of them with you.
Some of you may know others won't that i served my apprenticeship as a signwriter which i was lucky enough to do at one of the largest breweries in the world at that time, I found it fascinating that such a trade could cover so many varied jobs and tasks not just painting signs by hand but gilding, refurbishing old vehicles and carriages and pinstriping, unfortunately as advancements were made in graphics and such the job became a dying trade the brewery went through vast changes and unfortunately many skilled workers including Coopers and Coppersmiths all lost their jobs. This past weekend i visited what was once one of those workshops where i was lucky enough to work as it now forms part of a museum and has been turned into a very unique restaurant. 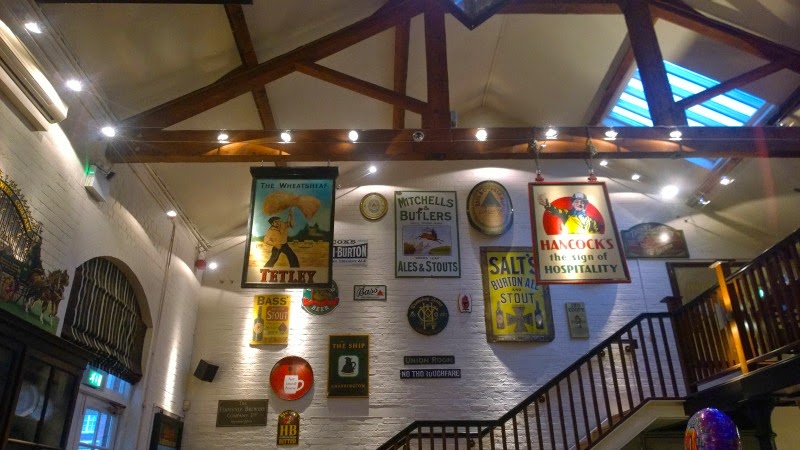 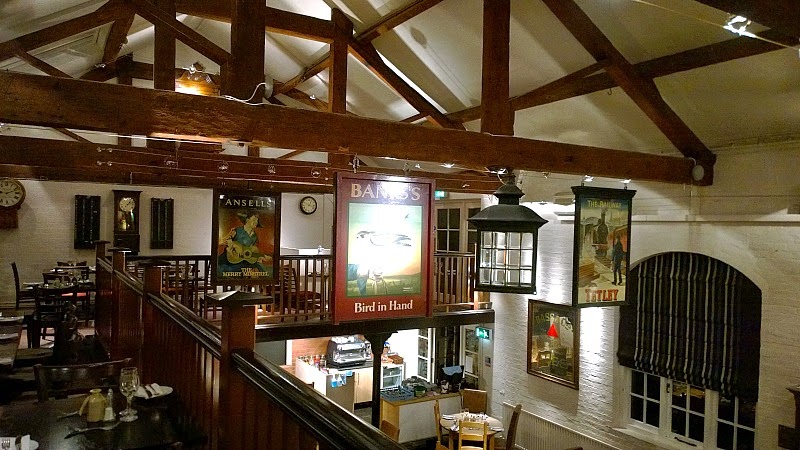 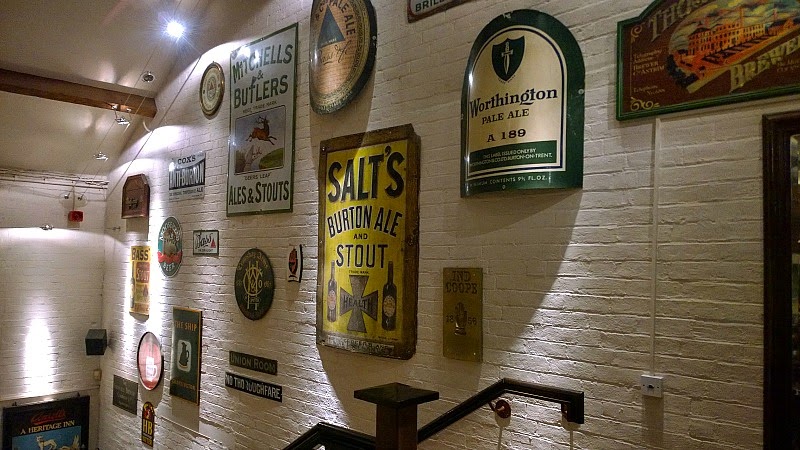 I couldn't believe how much the place had changed from the last time i was in here, the upper floor level in the second image didn't exist and has since been installed as further seating for the restraunt. 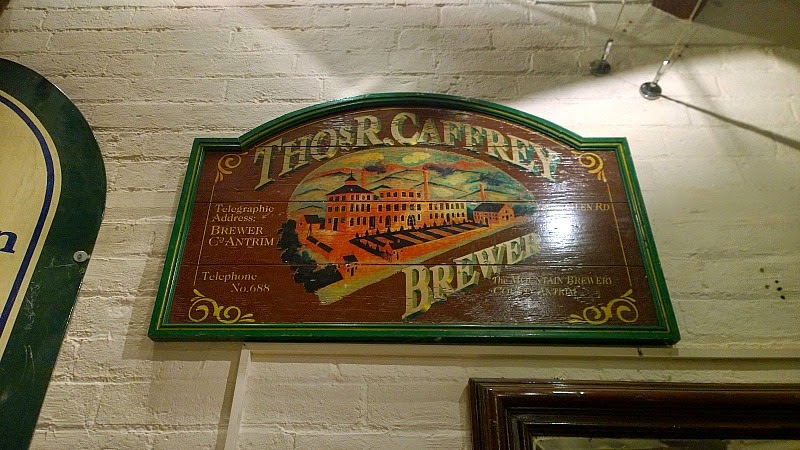 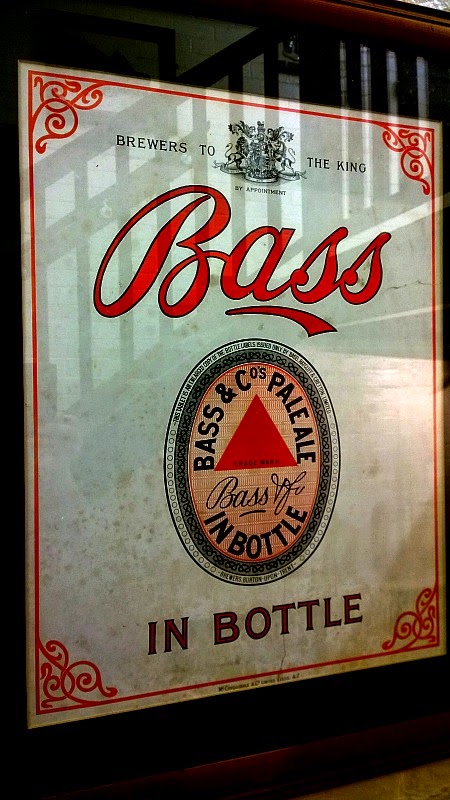 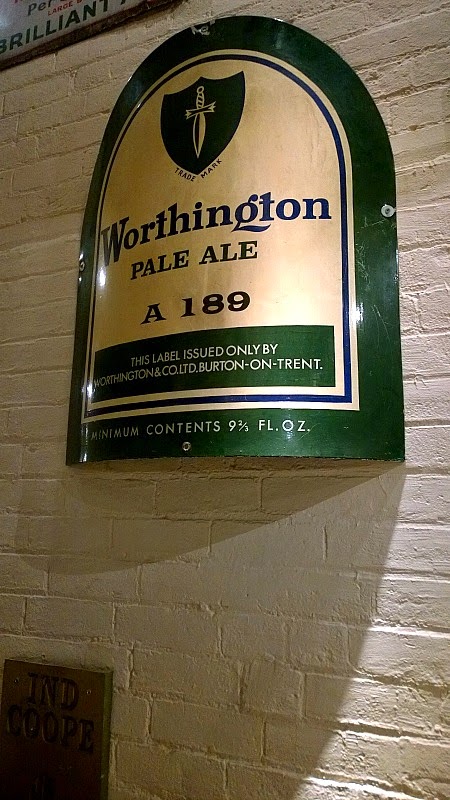 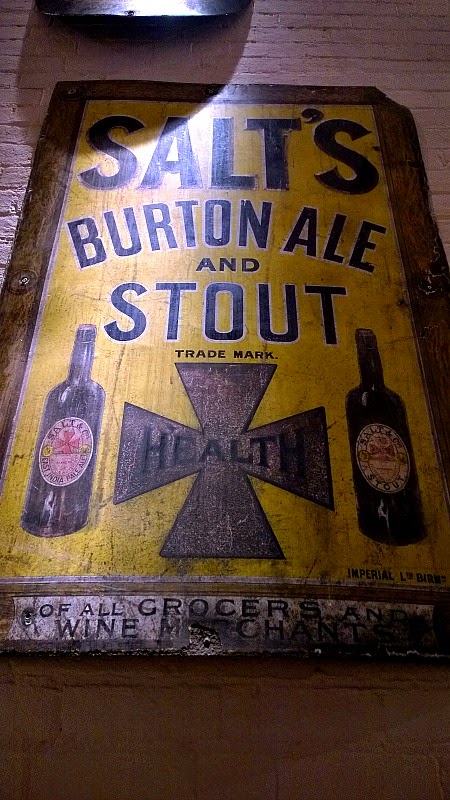 Virtually all of the walls were adorned with old hand painted and enamelled signs from every year. 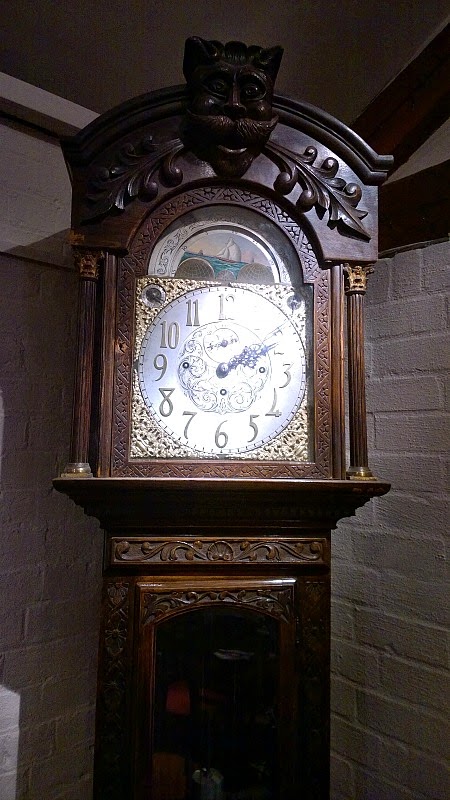 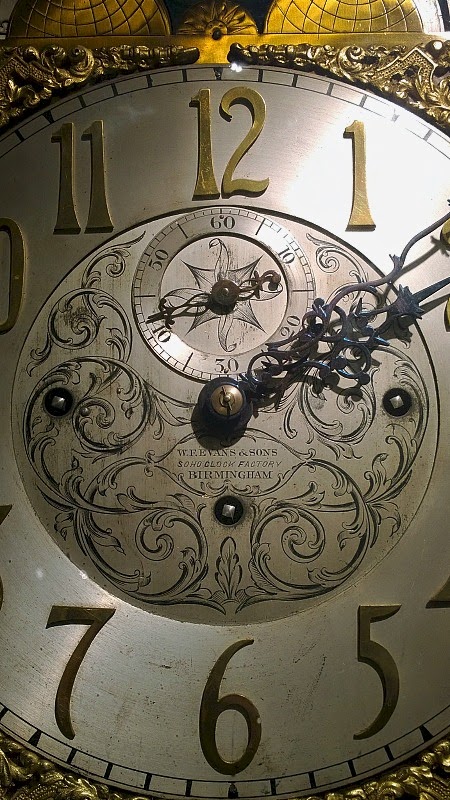 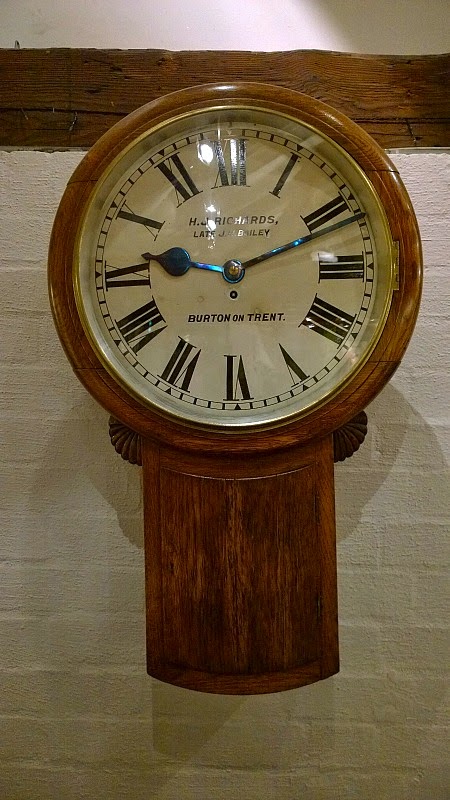 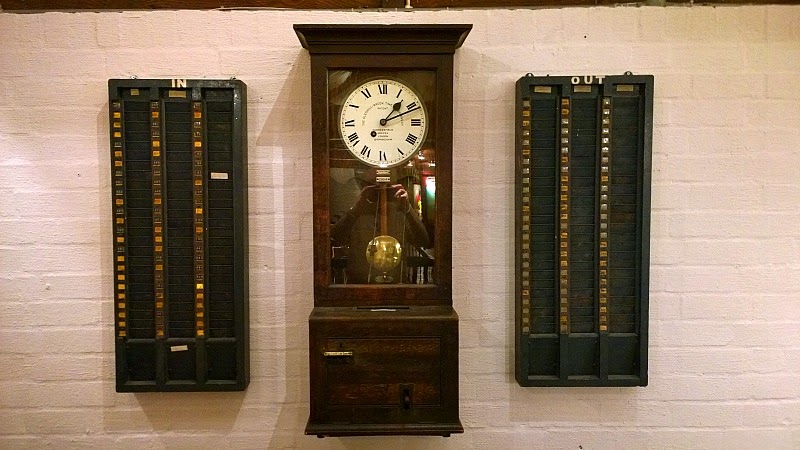 Along with many different locally made beautiful clocks all of which added to the charm of the place, there were also many paintings and photographs from the turn of the century showing these skilled men at work these i have not uploaded due to © reasons .... This place formed an important part of my artistic creativity not only by learning new things, but more importantly learning them from skilled men who had also been taught by skilled men themselves the brewery was founded in 1777 and had always painted its own livery on its own vehicles from horse drawn drays to modern transportation.  Have a great week everyone. Tony.﻿
﻿
﻿
﻿
﻿
﻿
﻿
Posted by Miniature Treasures at 19:14 11 comments:

Hi everyone, well as i mentioned previously here is another box i have constructed but this time adding an olive wood veneer to the lid. 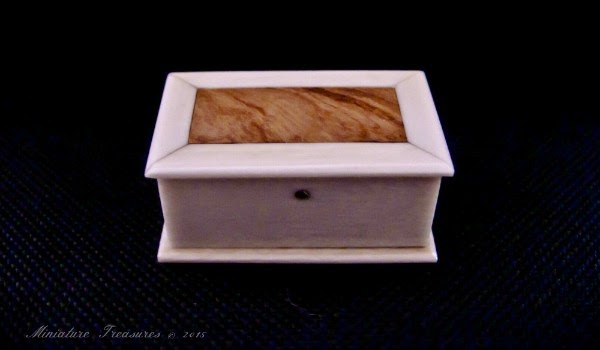 This box measures in at 1'' width x  5/8'' Depth again ideal for keepsakes or letters. I have been making these from the surplus offcuts which have mounted up from me working on a larger project which has taken up a vast amount of recycled ivory and thought that instead of just putting the spare pieces away in my stash id make some simple items with them. Hopefully i'll be able to share this larger project with you once its complete i might even throw in a teaser photo before i reveal the completed piece but still need to complete the inside and its contents. 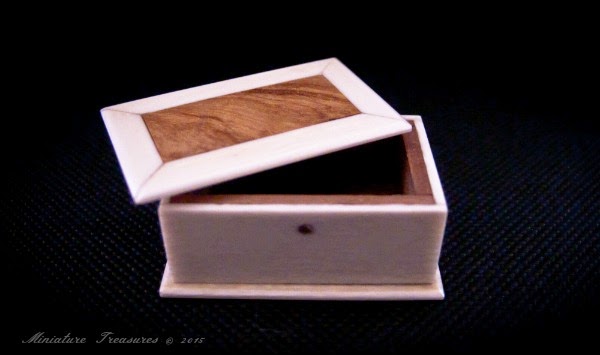 While making these tiny boxes it has given me some great ideas for other items i can make with the offcuts combining different materials together so hopefully there will be plenty more in store, This piece together with the others i have made is available on my FOR SALE page.
Have a great weekend everyone  Tony.﻿
Posted by Miniature Treasures at 17:54 22 comments:

Hi everyone, since i've been working with the pre ban ivory i acquired and constructed the treasure casket with i thought id make a few more basic tiny boxes in different styles. 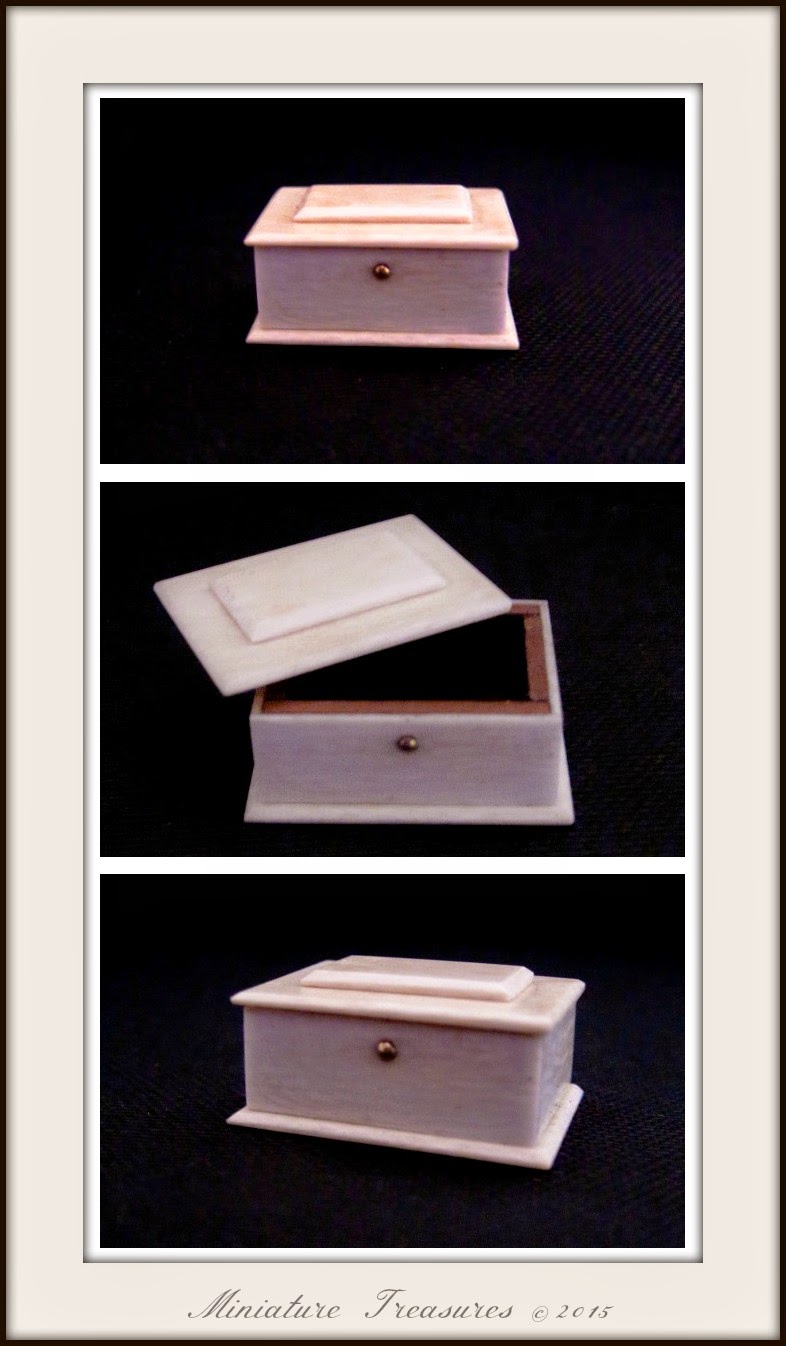 These are just very basic and simple boxes which have no hinges so the lid is fully removable this first one measures 25mm in width and is 13mm in depth so could be suitable for holding letters keepsakes or trinkets, The box i'm currently working on is slightly bigger and has an inlaid olive wood lid. Available on my FOR SALE page.
Have a great weekend everyone. Tony﻿
Posted by Miniature Treasures at 17:35 14 comments:

Sometimes i have so many ideas for pieces i want to create that i have to write them down in detail or even make a quick sketch so i dont forget, This piece of work was one of those but i had to wait until i was in a position to replenish the Ivory i needed to complete it this came about a few weeks ago when someone i've known for a few years told me he had some for sale as he had just refurbished a church organ that was built in 1835 ....so the casket which would eventually hold that golden tiny jug began to take shape. 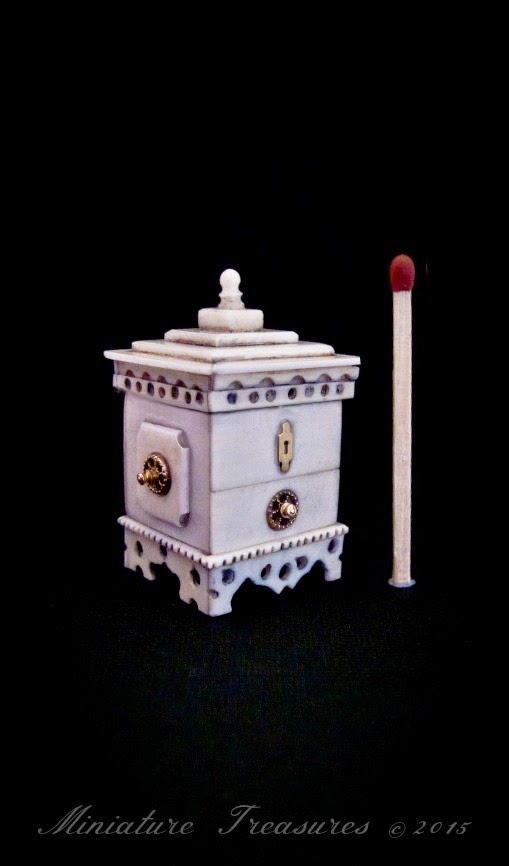 Ive had the tiny gold jug for some time and always felt it was a difficult item to include within another piece of work that would make it work as one piece but after some thought i came up with this idea that i think has worked perfectly. The casket itself measures just 21mm square and stands 41mm in height it is as you can see just slightly smaller than the matchstick. 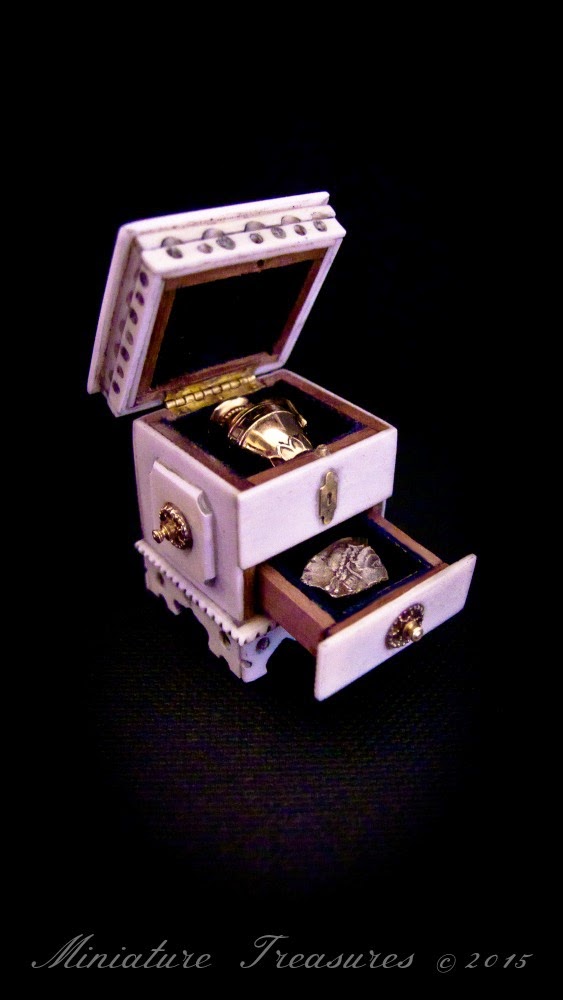 The casket also has a draw which contains a tiny silver roman coin fragment this is exactly how it came out of the ground , you can just make out the head on one side of the coin unfortunately i have no idea who it portrays. 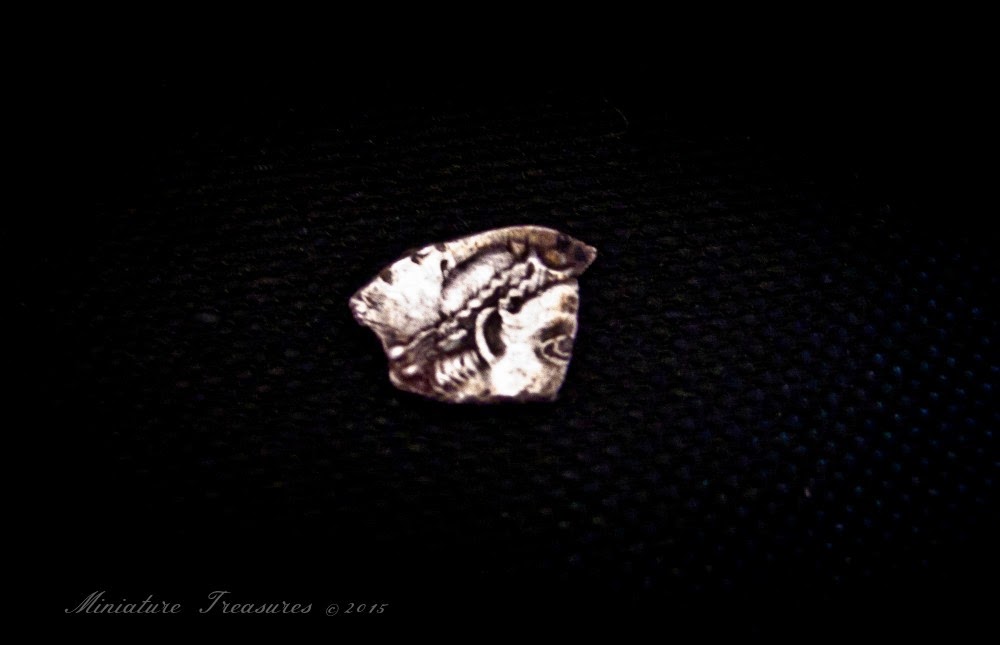 The jug is a comfortable fit but is tricky to remove with your fingers well mine at least but i'm sure someone with nimble and steady hands would be just fine the box and draw are lined with antique dark blue victorian velvet from an old jewellery box. 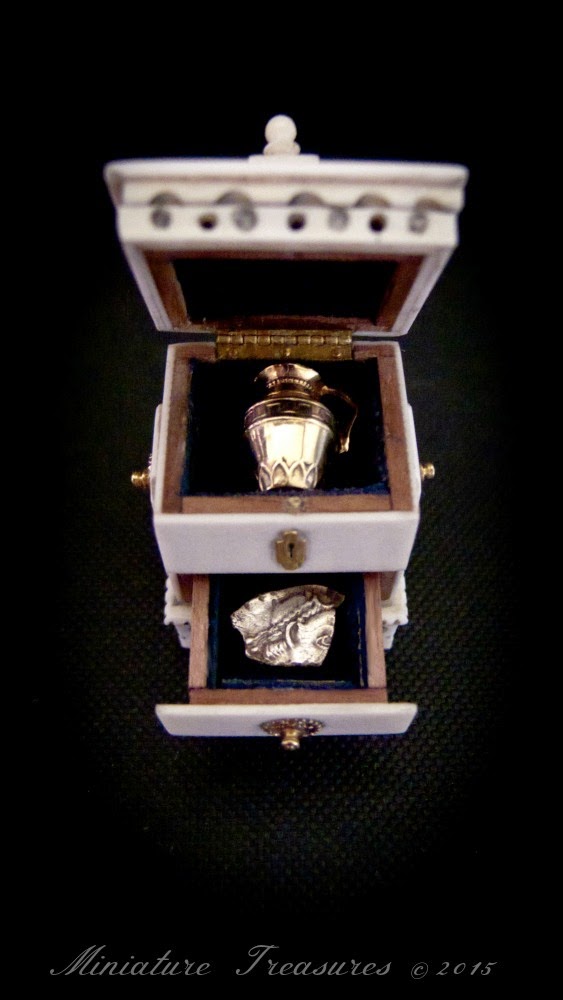 I think the two go together perfectly and the casket just finishes the whole piece off,  the jug is also hallmarked as 9ct Gold but i'm not sure of the makers mark or date. 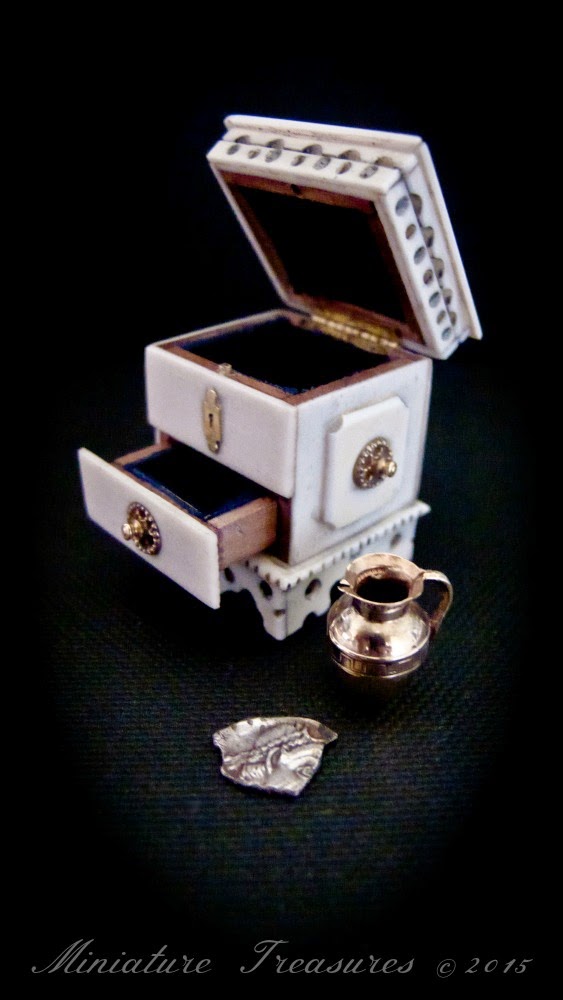 
﻿
﻿
A perfect little treasure casket that holds two very unique items. This piece will also be available on my FOR SALE page.
I'll hopefully be making some more miniatures out of the same batch of ivory that this was made with in the future and look forward to sharing these with you too. Have a great weekend everyone.  Tony.
Posted by Miniature Treasures at 18:24 29 comments:

My next piece of work is something quite special and will be housed in another special piece which i will keep you updated on. 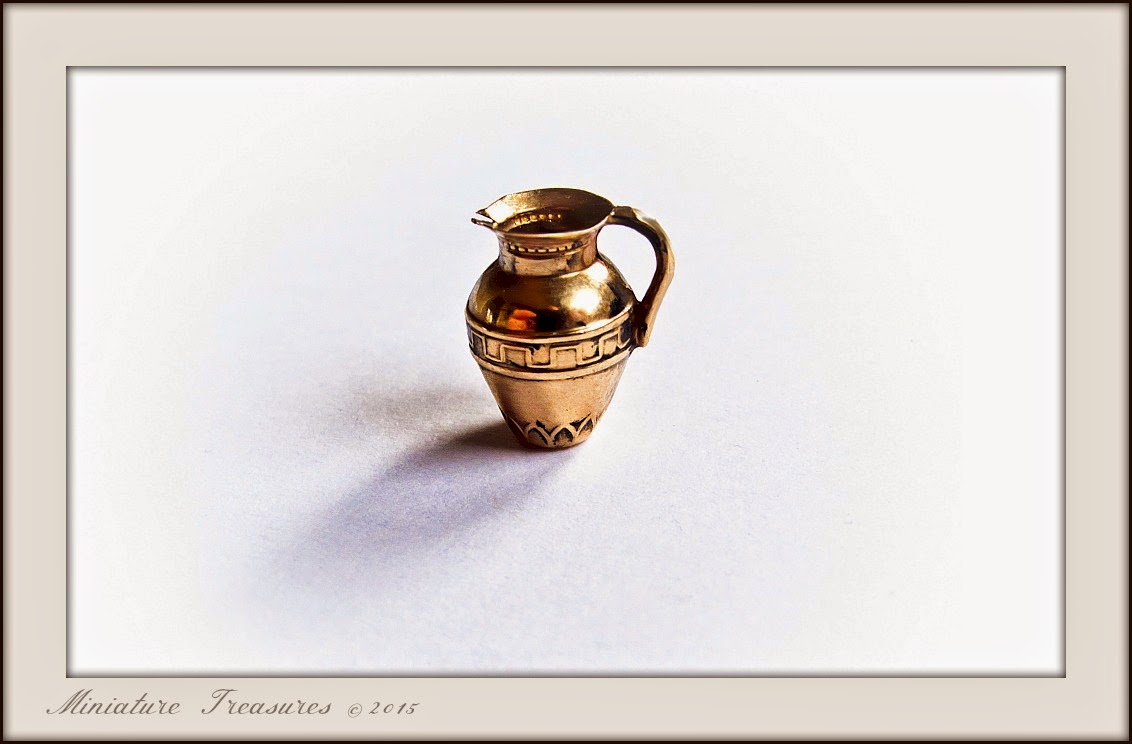 Measuring just 13mm tall this 9ct Gold hallmarked jug is a replica of a roman wine jug complete with pattern embossed into the metalwork itself as the real jug would have had. This little treasure will be housed in a tiny ivory casket which is my next project along with another tiny piece of history. Im certainly looking forward to making this next piece as i have a great interest in history and incorporating it into pieces i make as and when i can.
A happy easter weekend to everyone. Tony.﻿
﻿
Posted by Miniature Treasures at 16:24 14 comments:

Hi everyone, well as promised the cabinet for the fungi is now complete this was made from walnut and pre ban ivory on the draw front and side panels.

I very much enjoyed making this piece of work as its something i've not really made before with the exception of the cabinet and have no doubt i shall be making a few more which will be slightly different in appearance this piece will be available in my FOR SALE section shortly. I thought id also share these beautiful Apothecary Naturalistically Painted Plaster Display Models of Fungi, these have been mounted on wood bases with a paper label giving the Latin name for each variety Probably French Circa 1900 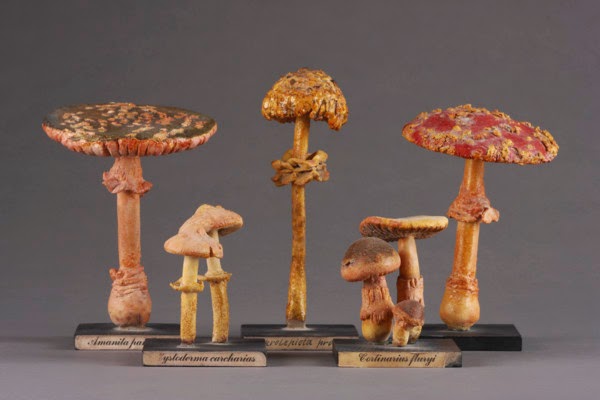 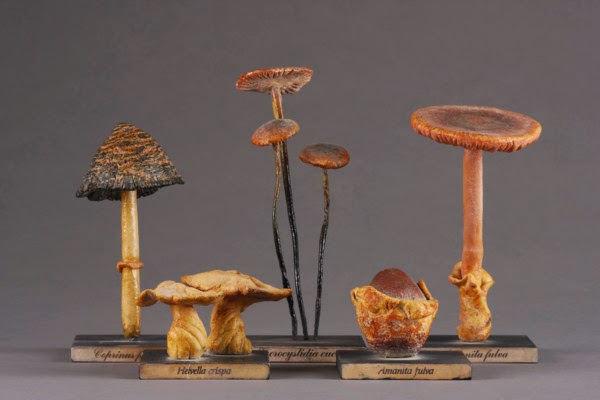 I think you'll agree that these are quite beautiful and very interesting, Visual aids don't really exist like this anymore and pieces like these have become more and more valuable and collectable.
Have a great weekend everyone.  Tony.