Hi Folks, its been a few weeks since i last posted due mainly to work commitments and the fact i haven't been finishing until gone 10.00pm at night so apologies to everyone who has left comments that i didn't reply to straight away . I'm now off work for a few days which means i can hopefully get a little work in on my own build, catch up on all your posts and do a few other things too.
I have just completed this Cassone or Marriage chest which i started a while back. 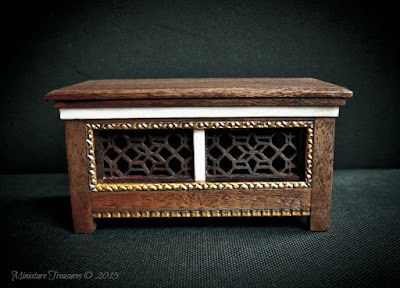 The chest has four carved panels two at the front and one at each end which are also surrounded with a gilded gold border above these sits a band of ivory strip which is also continued in the centre. 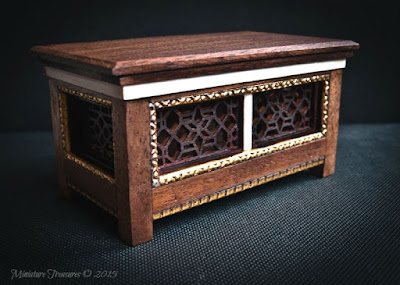 I used reclaimed timber to make this piece which was once part of a decorative fireplace, the chest is
3'' long and just over 1.5'' in depth and stands just over 1.5'' in height. The Cassone or marriage chest was usually given to the bride by her parents as their contribution to the wedding and would commonly sit at the foot of the bed, I'm guessing these would have had a multitude of usages from personal effects to keeping clothes and maybe even bedding in, some could be lavishly decorated with paintings of the family and there crests too. This piece is available on my FOR SALE page.
Hopefully i will be sharing some new photos of the progress on my build a little later in the week.
Have a great week everyone.  Tony.
Posted by Miniature Treasures at 12:02 19 comments:

I have now managed to catch up on a few jobs around the home and complete the commission piece which i spoke of in previous post Hopefully this will be on its way to the USA this week. 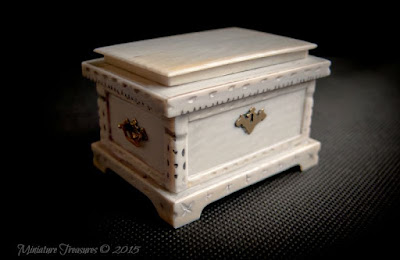 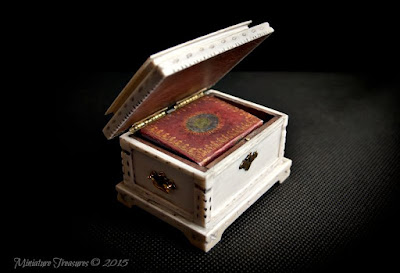 The casket contains a book of hours and also has a false bottom which can be removed to reveal a secret hiding place for small treasures and valuables. 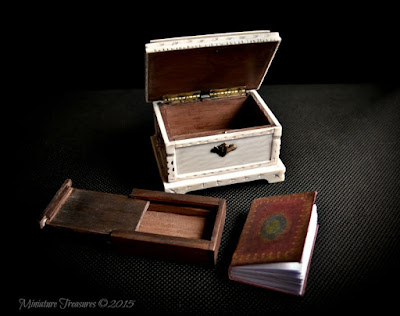 Hopefully over the next few weeks i will be spending a little more time on my own build with a view to start constructing the main front entrance and constructing the other half of the ground floor walls.
Have a great week everyone.  Tony.
Posted by Miniature Treasures at 19:07 22 comments: