Hi everyone, as i mentioned in my previous post i have installed a nook bed on the upper floor beside the fire breast wall. 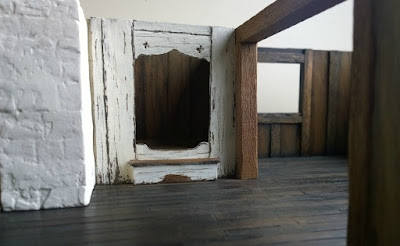 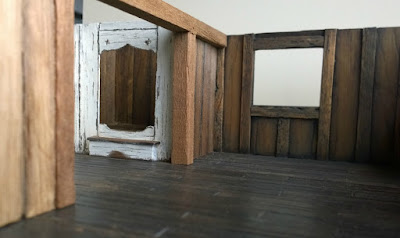 As you can see from the above image i am also in the process of putting a partion wall in place that will divide the upper floor up into two separate rooms this still needs work on it to complete it. I have just about reached the point now where i cant really do any more work until i have installed the lights,so until i have come up with ideas and solutions for these i dont think there will be much more progress on the interior, i cant wait to start making the furniture for this project too Exciting times ahead! Have a great weekend everyone. Tony.

Posted by Miniature Treasures at 13:36 23 comments:

Hi everyone, i have installed the first sections of planked walling on the upper floor level. 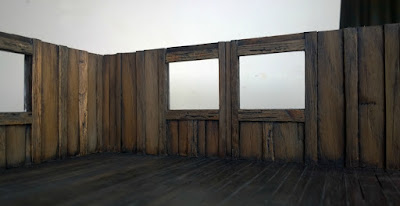 I've been undecided whether to leave the timber as is or give it a coat of lime wash ... Please let me know your thoughts on this, leaving the timber natural will make the room quite dark once the roof is in place but from the buildings i have been in from this period they do all appear quite dark inside.

This brings me to another topic about how im going to light this place, ive decided that im not mounting any ceiling lights so wall mounted lights and a combination of either oil or candles will be the choice how ever looking at whats available in 1:24th scale here in the UK does not give me large amounts of enthusiasm so im guessing it will either involve making my own or modifying standard lights that are available to something i like and blends in with everything else,Panels and floor boards have been left loose to accommodate wiring for these with a wood shed at the rear of the property housing any switches ( yet to be built). 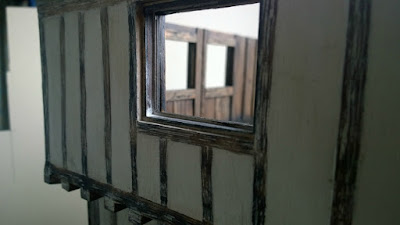 Have a great weekend everyone. Tony.

Posted by Miniature Treasures at 11:50 14 comments:

Hi everyone, i,ve been spending sometime cutting timber up ready for use on the interior, 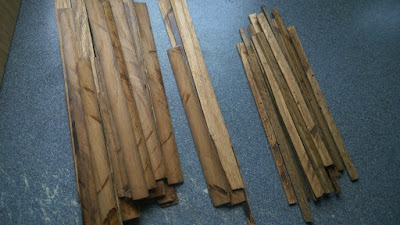 In this case i have used English oak that i have been saving for this particular project originally it was a      8''x 6''x 36'' length that was cut out while under going repair in a house built in 1568 the smell while cutting this wood is fabulous. I intend to use this oak to line the upstairs walls these are called planked walls or Muntin screens and were usually the cheaper version of paneled walls. Most muntin walls were left rough timber and were either built using a frame work construction or were nailed directly onto the timber frame of the building. 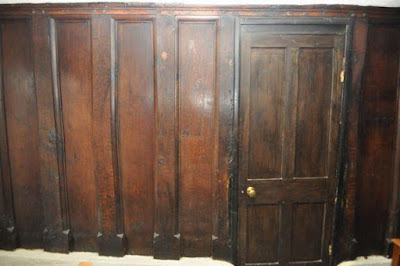 These helped primarily to keep the inside warmer but also added a different decorative approach which many people would decorate with paintings and ink patterns, there,s a house close to where i live that has excellent examples of this decorative timber. i have visited this place a few times to use the place as a reference for the dimension of materials that i have used in this project. 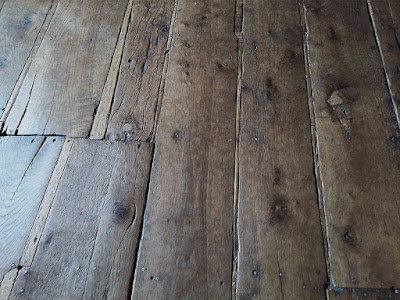 Floor boards for example were cut in widths from as little as 3 inches right up to a staggering 18 inches and would often be laid in any way that enabled no holes or cracks to allow vermin to crawl through stone is another material that if it was taken from another building that had fallen into disrepair some pieces may look slightly out of place in a small house but these stones may have come from monasteries or very large houses.
Well hopefully i should have some planked walls to show you quite soon. Have a great week everyone. Tony.
Posted by Miniature Treasures at 15:20 6 comments: